Fast cars capable of setting record lap times are cool, but the problem is that few are affordable and accessible enough to the masses. That’s what’s great about the Hyundai Veloster N. It is a proper hot hatchback with daily usability cool looks, and inspiring performance that’s actually attainable for the average consumer. In a way, it is a bit like a Ford Mustang for the millennial generation, but without the retro label.

Of course, the market has a variety of fun hatchbacks with impressive performance capabilities. The Volkswagen Golf R, Honda Civic Type R, and Mini Cooper JCW are all great examples. The Veloster N, however, manages to go head-to-head with the established players, while playing the old Hyundai trick of dramatically undercutting them on price. With an MSRP of $34,999, the N looks like an absolute steal next to the $40,000 plus price tags of its closest rivals. The Volkswagen Golf GTI is a close match in price, but isn’t quite in the same league in terms of fun and performance. 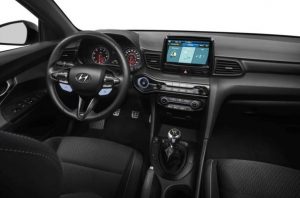 The Veloster N is just a total blast to toss around a winding road and a pretty capable track performer as well. That’s hardly a surprise given that Albert Biermann, the former head of BMW’s M division, runs the N line at Hyundai. Plenty of time was spent fine-tuning the driving dynamics on Germany’s famed Nurburgring racetrack, and it shows. The N can be thrown into corners with huge amounts of confidence and poise. The suspension tuning is firm, but the result is incredible body control and agility that’s bolstered by confidence-inspiring brakes and responsive steering. I’m not sure whether it could keep up with the Civic Type R or a few all-wheel drive performance cars on a racetrack, but the N would certainly have no problem holding its own.

Under the hood sits a turbocharged 2.0L engine that produces a healthy 275 horsepower and 260 lb-ft of torque. Power goes to the front wheels through a 6-speed manual gearbox with auto rev-match capability and an electronically-controlled limited slip differential. The engine feels punchy with a nice kick of low-end torque that holds through the rev band. It even sounds exciting thanks to an active exhaust that pops and bangs as you work the shifter through the gears. Helping to keep that power glued to the road are grippy Pirelli P Zero tires and that e-LSD which distributes the torque where it’s needed for higher cornering speeds.

One area where the N stands apart from its rivals is the customizability of its controls. Everything from the engine response, steering weight, suspension firmness, stability control, exhaust sound, and auto rev-match can be adjusted at the push of a button for the desired feel. You can even save your favorite settings using an N button on the steering wheel, which is a nice touch. Elsewhere, the interior is somewhat basic and spartanly equipment by Hyundai standards, but there are a few highlights. The infotainment system is effective and straightforward to use, a heated steering wheel and heated seats are present, and the front seats, though not particularly eye-catching, are comfortable and supportive. 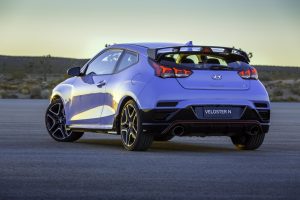 Eye-catching would be good way to describe the exterior design. Though certainly not to everyone’s taste, the Veloster has a distinctive, sporty look that stands apart from other hatchbacks. The N model gets unique 19 inch wheels, red accents, a rear wing, and an aggressive front and rear fascia design to complete the hot-hatch look. The most unusual part of the Veloster’s design is the three-door arrangement which makes it less practical than a traditional hatchback with four regular doors. The rear seats are also fairly tight and not as usable as those in some rivals.

The Veloster N may be the N division’s first go at a performance car, but it is easy to say that this is the best driver’s car that Hyundai has produced to date. It has all the right hardware to attack corners and circuits like a pro, and it does so with a playfulness and character that a few seasoned hot-hatch veterans are a bit short on. Aside from a firm ride and a few practicality issues, it’s also well-equipped and pleasant enough to use on a daily basis when lap times aren’t part of the agenda. It would be nice to see an N version of the Elantra GT for those who prefer a more mature look and extra space, but as it sits, the Veloster N an accomplished hot hatchback that should satisfy performance-focused buyers on a budget.