The Toyota Supra can trace its roots back to the 1970s when it was originally based on the Toyota Celica sports car. The Supra didn’t make serious waves, however, until, the fourth generation MK4 model from the 1990s. Thanks to its incredible tuneability, indestructible 2JZ engine, and a memorable stint as Paul Walker’s ride of choice in The Fast and the Furious film, the MK4 Supra earned itself legendary status among the enthusiast community. After a two decade hiatus, the Supra is back for a fifth generation, taking a bit of inspiration from its past, combined with a hefty amount of help from an unexpected ally.

The Supra’s eye-catching design is loosely based on Toyota’s highly-praised FT-1 concept from 2014. It’s a striking looking sports car with taut proportions and shapely details from head to toe. The design is all Toyota, but the Supra’s bones are actually shared with the BMW Z4 Roadster. In an effort to save costs, the two sports cars were jointly developed and are actually built on the same assembly line in Graz, Austria. The result is that the Supra actually share’s its entire platform, suspension, brakes, and drivetrain with BMW. Final suspension and drivetrain calibration, however, is Toyota’s own. 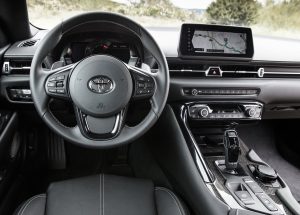 The parts sharing can also be seen in the cabin where the Supra makes liberal use of BMW components. Aside from the JBL premium sound system, just about everything from the comfortable sport seats to the iDrive-based infotainment system, to all the minor switchgear, will look familiar to BMW owners. The benefit of this, however, is that the interior has an unquestionable upscale aura with excellent materials and a high level of build quality. It is also surprisingly feature-packed and comfortable for a dedicated two-seater sports car.

As much as I could picture one using a Supra on a regular basis for its comfort and refinement, it is the engaging and thrilling driving experience that is the real draw. Toyota benchmarked the Porsche 718 Cayman during the Supra’s development, and the results show. The steering is razor sharp and wonderfully responsive to inputs. The large brakes inspire confidence with immense stopping power and great pedal feel. And the suspension is remarkably well-tuned with excellent body control and chassis balance when hustled. Although normal mode does a fine job of showcasing the Supra’s dynamic talents, the controls can be sharpened further with the simple push of a sport button. Each of the settings can be tailored to the driver’s preferences with an individual mode as well. 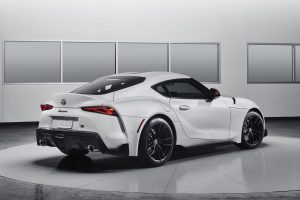 Although handling and cornering ability are vital parts of the sports car experience, the Supra has traditionally been better known for its astounding straight-line performance courtesy of its highly tunable engine. Like the 2JZ-powered MK4, the latest Supra is powered by a highly capable turbocharged straight-six engine. The BMW-sourced unit produces a claimed 335 horsepower and 369 lb-ft of torque, and powers the rear wheels exclusively through an 8-speed automatic transmission. 0-100km/h comes in as little as 4 seconds with a wonderfully smooth power delivery and an aurally satisfying tone accompanied by pops and crackles in sport mode. The 8-speed automatic is equally impressive, delivering rapid-fire shifts with uncanny accuracy and judgment.

There’s no question that the Supra delivers on the full sports car experience with outstanding performance and thrills. The fact that it is able to deliver as much as it does for an MSRP of $64,990 is quite impressive when compared to similar performing, higher-priced sports cars such as the Porsche 718 Cayman and BMW M2 Competition. The only significant knock really is the lack of a proper manual gearbox option for that extra bit of engagement. As it sits, however, the Supra is a highly accomplished sports car. It is a different animal from its predecessor, but no less a proper Supra for it.