The Highlander was Toyota’s first go at a sizable, three-row, crossover SUV. Although it started life as a practical family mover alternative for those who wouldn’t be caught dead in a minivan, the Highlander has quickly become the default choice in the Toyota lineup for large families. Now in its fourth generation, the Highlander is better prepared than ever to handle whatever families can throw at it.

Although more evolutionary than revolutionary than the generation before it, the latest Highlander is the largest and most advanced version to date. Seating configurations include 8-passengers on most trims or 7-passengers with second row captain’s chairs on the top Platinum trim. With the cooperation of second row passengers, the third row seats can just accommodate a pair of adults. Those looking for maximum space in their crossover, however, may prefer the more spacious Honda Pilot or Volkswagen Atlas.  Still, with the second and third rows folded flat, we found enough space to carry a 78 inch television and even a three-seat sofa.

The interior is a well-designed space with nicely finished surfaces and plenty of practical storage solutions. Moving up to the top Platinum trim adds enough features to rival that of a well-equipped Lexus RX 350. Highlights include a detailed head-up display, second row heated seats with captain’s chairs and sunshades, a large panoramic roof, and a 12.3 inch touchscreen infotainment system which replaces the standard 8 inch screen. The controls are well thought out and easy to use, but the graphics of the native user interface do look a bit flat for a vehicle in this price range. On the plus side, the infotainment system is compatible with both Apple CarPlay and Android Auto.

The Highlander is powered by Toyota’s long-running 3.5L V6 engine matched to an 8-speed automatic transmission with all-wheel drive on all but the base model.  With 295 horsepower and 263 lb-ft of torque, the engine gets the job done with an adequate amount of power and reasonable refinement. The far more interesting and compelling drivetrain is the optional hybrid system, which is a unique choice in the three-row crossover segment. The Highlander Hybrid uses a 2.5L 4-cylinder engine matched to Toyota’s state-of-the-art Hybrid Synergy Drive system. The result is 243 horsepower and a class-leading fuel economy rating of 6.7L/100km in combined city highway driving. That’s far better than any competing mid-sized crossover, including the regular gas model’s average rating of 10.5L/100km. 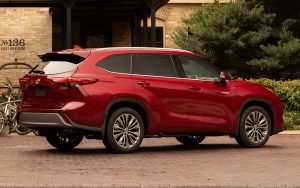 Pricing for the Highlander starts at $39,990 for the L model with front-wheel drive, or $43,490 for the LE with all-wheel drive, and can climb up to $53,990 for the top-trim Platinum model. The Highlander Hybrid commands a $2,000 premium over the equivalent gas model ranging in price from $45,490 to $55,990. The price spectrum represents excellent value and is in line with competitors such as the Honda Pilot, Subaru Ascent, Hyundai Palisade, and Kia Telluride. At $47,990, the XLE Hybrid seems to be the sweet spot in the range with a features list that includes Softex synthetic leather upholstery, 3-zone climate control and a power liftgate. All Highlander models include Toyota Safety Sense 2.0 with a comprehensive list of active safety technology.

All things considered, the Highlander remains a well-rounded sensible choice within the 3-row crossover segment. It is also one of the easiest to recommend thanks to a well-earned reputation for long-term reliability and high resale value. The hybrid model backs that reputation with a 10 year or 240,000km warranty on the hybrid battery pack, which is the longest of its kind. The segment is filled with many compelling options, but the Highlander continues to lead the way in the areas that arguably matter most to consumers, and that makes it an easy choice.