Subaru, somewhat amusingly, calls the Legacy the “SUV of sedans.” Although the brand has long been known for its lineup of rugged, durable, off-road capable vehicles, using this label for a somewhat staid midsized sedan may be a stretch too far. In any case, the claim largely stems from the fact that the Legacy, like most of the lineup, comes equipped with Subaru’s symmetrical full-time all-wheel drive system. This helps give it the all-weather/all-road versatility of its SUV siblings. Competing midsized sedans, however, such as the Nissan Altima and Toyota Camry AWD, have erased the Legacy’s all-wheel drive advantage, which means that the SUV of sedans will need a little more than that to stay competitive.

Like most Subarus, the Legacy doesn’t have a lot going on in the looks department. It’s a fairly conservative design that prioritizes function over form. That approach might work for more utilitarian models such as the Outback and Forester, but a sedan really does need a bit of pizazz to stand out and help fight the crossover surge. The Outback, the Legacy’s mechanical twin, by comparison, tries a little harder with its lifted ride height, chunky body cladding, and even blacked-out trim and wheels on the off-road ready Adventure trim. It also offers more cargo space compared to the Legacy’s standard trunk. Space for occupants, however, is quite generous and no different between the two. 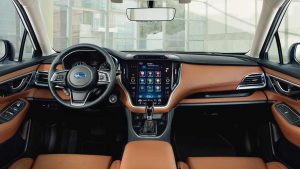 In addition to offering an accommodating cabin, the Legacy makes a reasonable attempt at creating an upscale atmosphere. The materials are well finished, and the top Premier model even offers attractive brown-coloured upholstery made from soft Nappa leather. Most of controls operate through an 11.6 inch tablet-like touchscreen which appears to take inspiration from Tesla. Though graphically pleasing and fairly responsive, the menu structure does take some getting used to and can be distracting to use while driving. Climate controls traditionally operated through buttons or dials, for example, now require digging through a menu screen. Apple CarPlay and Android Auto are available, but only cover a portion of the screen due to its vertical orientation.

The Legacy is available with two different boxer 4-cylinder engines both matched to a CVT transmission. The volume seller will be 2.5L unit producing 182 horsepower and 176 lb-ft of torque. Normally I would recommend saving some money and going with a less complicated naturally-aspirated engine, but the 2.5 just feels laboured and underpowered in the relatively heavy Legacy and Outback models. The GT models come with a turbocharged 2.4L unit producing a much healthier 260 horsepower and 277 lb-ft of torque. It moves the Legacy with authority while achieving nearly the same fuel efficiency at about 12.0L/100km in the city and 8.0L/100km on the highway. Both engines get a standard auto start-stop system which you’ll want to disable on every drive due to its jarring operation.

Those looking for a smooth, uneventful driving experience should be quite satisfied with the Legacy. It offers a surprisingly comfortable ride with softly sprung damping adept at absorbing road impacts and vibrations. Like most Subaru models, expansive glass all around means that outward visibility is excellent as well. On the flip side, the Legacy offers little in the way of sportiness or driving fun, so if that’s what you are after, move on. The Honda Accord and Mazda6 continue to lead the way in that department. If you want a midsized sedan with zero sporty pretentions, however, the Legacy fits the bill. 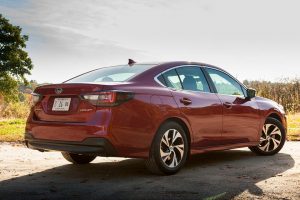 Although the Legacy isn’t exactly leaps and bounds better than its competitors, it does have an advantage when it comes to entry-level pricing. The base Convenience trim has an MSRP of only $26,395, which includes plenty of desirable features including Subaru’s Eyesight driver assist active safety technology. That’s significantly less than its rivals and arguably better value for money when you factor in Subaru’s strong reliability history and high resale values. Higher trim levels, however, are more evenly priced with the competition, making the Legacy a harder sell. Compared to its mechanical twin, the Outback, the Legacy is priced about $4,000 lower for the equivalent model, further highlighting its value proposition.

The Legacy certainly does a lot of things well. It makes a compelling option in the affordable base form or as the top of the line GT Premier with the upgraded interior and 2.4L turbocharged engine. For some buyers, however, it may not be enough. It has the all-wheel drive to draw in the few stragglers who haven’t fallen for crossovers, but then, so do some of its rivals. The Legacy is a very well-designed sedan and a solid choice, but for anyone who isn’t already a Subaru fan or dead set on having all-wheel drive, a little more convincing may be needed.