The Porsche 911 is often considered to be the benchmark of the sports car world. Although the market has its fair share of worthy competitors, none share the 911’s rare gift of more than five decades worth of careful evolution. In a chest of gems, the 911 would be a glimmering diamond that has been thoroughly polished again and again to an obsessive degree. The 992-version marks the eighth generation of Porsche’s iconic model and it is the most accomplished and polished version to date.

The 911 is arguably the most recognizable sports car on earth, and the 992 certainly hasn’t tampered with its familiarity. Many of the long-established styling cues, including the round headlamps, flared arches, and the iconic profile, remain intact. Only a keen-eyed few will be able to spot the finer details which differentiate it from its predecessors. Although quite large by 911 standards, the 992 is only marginally longer than the 991 generation it replaces. All 911’s now receive the widebody treatment with the wide rear track once reserved for the all-wheel drive models. 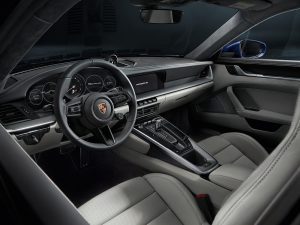 The interior represents a far greater deviation from the past than any part of the exterior. The traditional five gauge instrument cluster has been replaced by a single analogue tachometer flanked by high resolution digital displays. An equally sharp and extra-wide centre touchscreen offers a feature-rich menu structure with excellent responsiveness. Aside from the vestigial rear seats, the interior as a whole is a significant leap forward from the previous generation 991 in just about every way.

One of the 911 Carrera’s longstanding talents is its ability to carefully straddle a line between sports car and grand touring car. Aside from a bit wind noise at freeway speeds, it offers the usability and comfort that one would expect from a long-distance cruiser or daily driver. Drive it with a bit of enthusiasm, however, and it’s easy to see why the 911 is often so revered. The modern performance enhancing technology is perfectly complimented by a wonderfully old-school sense of purity and enjoyment. It is a true driver’s car that can flatter you with its effortless capability, yet still keep you involved in the action. 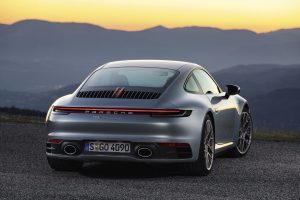 The engine is a twin-turbocharged 3.0L flat-six which produces 443 horsepower and 390 lb-ft of torque in Carrera S and 4S form. With the help of lightning-quick 8-speed PDK gearbox and the surefooted grip of intelligent all-wheel drive, the 4S can launch from 0-100km/h in just 3.4 seconds. It is hard to imagine the need for the full-blown 911 Turbo when an ordinary Carrera 4S is this fast. Though muffled a bit by the turbos, the flat-six still delivers a pleasing howl and sings to a fairly lofty 7500 rpm redline. Although there is no arguing with the effectiveness of the PDK, the Carrera S and 4S continue to offer a three-pedal 7-speed manual gearbox for those who wouldn’t have it any other way.

Being such a well-established sports car with a history spanning over half a century, it is no surprise to learn that Porsche played its cards quite carefully when it came to designing the 992. When one has long mastered the sports car formula, incremental changes are all that’s really needed. In a lineup which includes trendy sport utility and electric vehicles, the 911 is something of a nostalgia piece. It also just so happens to be a jack-of-all-trades icon with a driving experience few can match.