As one of the pioneers of the luxury crossover segment, the Lexus RX has carefully honed and perfected the formula for comfortable, practical, family-movers on stilts. It has become one of the most popular and well-respected options in its segment thanks to its impressive reputation for quality and long-term reliability. For its mid-cycle refresh, Lexus has given the RX range a number of significant updates to help it maintain its supremacy in the luxury crossover space.

Other than a light revision of the spindle grill and exterior LED lighting, the RX maintains the striking design language of this model generation. Although a bit too angular and aggressive for some, the eye-catching, chiseled looks do give it an undeniably upscale look befitting a luxury SUV. The RX is available in two sizes which include the standard wheelbase as well as an optional “L” version with a long wheelbase and three row seating. Despite looking quite similar, the RX 350 L is a bit awkwardly proportioned due to the slightly added length. Still, with three-row seating, it offers an added level of flexibility which some RX owners will appreciate. 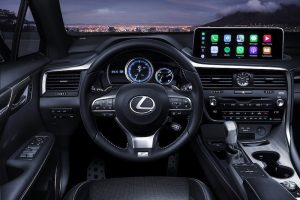 Although having three-rows may add to its appeal, the third row of the RX 350 L is ridiculously tight and only suitable for small children on short trips. Think of it as a five-seater with an occasional use third row or an extra-large cargo area with the seats folded. The middle row seats are much more accommodating and can slide or fold depending on the need. The interior is impeccably finished with a high level of build quality and materials we have come to expect from Lexus. The infotainment system’s native interface remains complicated and a bit frustrating, but the addition of touchscreen functionality along with Apple CarPlay and Android Auto capability makes it far more usable than before. It is also complimented by enough regular buttons and tuning knobs for a fairly user-friendly experience.

Despite its aggressive design and sporty garnishes, the driving experience of the RX is very much about comfort and refinement over handling and sportiness. The ride quality is exceptionally smooth and the cabin filters out most noises and vibrations. The equally -smooth and well-proven 3.5L V6 engine under the hood produces 290 horsepower, enough for brisk acceleration and passing maneuvers. The lack of an annoying engine-start-stop system or complicated turbocharging is refreshing to see and should help reinforce the kind of long-term reliability the RX is known for. With the help of a smooth-shifting and efficient 8-speed automatic transmission, fuel economy sits at a respectable 12.5L/100km in combined city and highway driving. The RX is even fine running on regular fuel which is a rare bonus in a luxury vehicle. 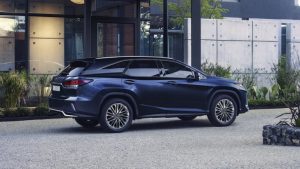 RX pricing starts at a fairly reasonable $56,050 for the RX 350 and $58,800 for the hybrid-powered RX450h. The three-row RX 350 L and RX450h L command $59,050 and $76,100 to start, but the hybrid model also comes with the feature-rich Executive Package that is optional on the two-row model. Given its price premium and lack of significantly added space, it is difficult to make a strong argument in favour of the three-row L model. With an average rated fuel economy of under 8.5L/100km, the hybrid makes more sense for those who are eco-minded. All things considered, there is no arguing with the spot-on formula of the standard RX 350. Even when equipped with the top-level Executive Package or F Sport 3 Package at $69,850, it represents decent value when compared to many competing luxury crossovers.

The luxury crossover space is filled with impressive choices, some of which include the popular BMW X5, Mercedes GLE, Acura MDX, and Volvo XC90. With the exception of possibly the Acura, however, none can approach the unbeatable value, quality, and reputation for reliability offered by the Lexus RX. Most of the SUVs in this segment can only be rationalized as a lease purchase due to significant out of warranty expenses and low resale values. The RX, however, makes a safe and solid choice for just about any form of ownership. With its latest technology updates, well-appointed interior and impressive comfort, the RX delivers a convincing luxury experience, easily making it a top recommendation.