With a portfolio of models based around trucks and crossovers, Ford has been hard at work expanding their SUV offerings to eventually include everything from the adventurous, off-road capable Bronco, to the “Mustang-inspired,” all-electric, Mach-E crossover. Amid the wide selection of jacked-up rides sits the Escape, which has long been the brand’s best-selling crossover and a popular choice within the compact crossover segment. Although it may lack the cool factor of some of the Ford’s snazzier SUV offerings, the Escape remains a sensible choice for those with practicality and affordability in mind.

In terms of design, the Escape has long ditched its boxy roots in favour of a more hatchback look with smooth surfaces and a drama-free appearance. It won’t draw eyes, but its clean design and sculpted headlights arguably bare a slight resemblance to far more expensive SUVs including the Porsche Macan and even the Aston Martin DBX.  A low beltline allows for relatively large windows and excellent outward visibility. In addition to feeling greenhouse-like, the Escape’s generous dimensions allow for a respectable amount of interior space for both front and rear seat occupants. The rear bench even slides and folds on a track which helps make the most of rear seat or cargo space depending on the need. 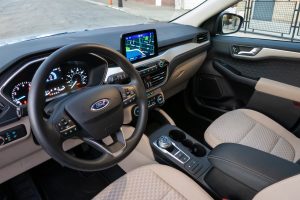 The interior is more functional than upscale with plenty of low-cost materials used throughout. Even so, it’s an approachable space with easy to use controls and a well-designed infotainment system with an available 8-inch touchscreen display. The Sync3 interface is relatively straightforward and is compatible with both Apple CarPlay and Android Auto. Ford Co-Pilot360 is standard on every Escape with active safety features that include blind-spot monitoring, rear cross-traffic alert, lane departure warning, automatic emergency braking, and pedestrian detection. Higher models add adaptive cruise control, lane centering capability, and active park assist.

The Escape is available with four powertrains including a hybrid, plug-in hybrid, and a pair of EcoBoost engines. S, SE, and SEL models get a turbocharged 1.5L 3-cylinder matched to an 8-speed automatic transmission. Although the concept of a 3-cylinder engine in a sizable crossover may seem questionable, the EcoBoost produces a respectable 181 horsepower and 190 lb-ft of torque. Those looking for generous power, however, will want to consider the turbocharged 2.0L 4-cylinder EcoBoost available on the SEL and Titanium models. With 250 horsepower and 280 lb-ft of torque, it allows for far quicker acceleration along with generous towing capability of up to 1,591 kg.

Perhaps far more intriguing than either EcoBoost engine, however, are the available hybrid drivetrains. The hybrid system consists of a naturally-aspirated 2.5L 4-cylinder engine matched to an electric motor with a total output of 200 horsepower and 155 lb-ft of torque. More significantly, it offers far superior fuel economy rated at 5.4L/100km city and 6.3L/100km highway. By comparison, my 2.0L EcoBoost tester only managed 11.0L/100km in mixed city and highway driving. Sadly, the smaller 1.5L isn’t rated for much better. The EcoBoost engines also suffer from having unrefined engine start-stop systems as well as the general complexity of turbochargers which some may find unappealing for long-term ownership. 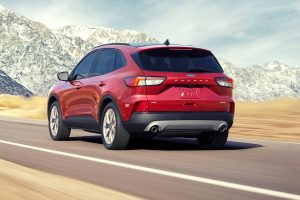 Pricing for the Escape starts at $28,549 for the S trim with front-wheel drive. The hybrid drivetrain is only available on the top-trim Titanium with a starting MSRP of $36,549. All-wheel drive can be added to any trim level for $1,500. The 2.0L EcoBoost engine is a $2,000 option on the SEL and Titanium AWD trims. For its attractive blend of features, efficiency, and value, the Escape Hybrid Titanium AWD represents the sweet spot with an MSRP of $38,049. The plug-in hybrid model offers an electric range of up to 50 kilometres and is a compelling option for those focused on minimizing their gas bill and carbon footprint. Its higher price point, lack of all-wheel drive, and charging requirements, however, make it less well-rounded than the regular hybrid.

There is certainly a lot of variety in the Escape lineup with a configuration for just about every need or budget. Compared to its top-notch rivals such as the Toyota RAV4, Honda CR-V, Mazda CX-5, and Subaru Forester, the Escape in EcoBoost guise comes off as a competitive, though hardly class-leading, option. Where the Escape holds a major advantage over its rivals is its available hybrid drivetrain. With outstanding fuel economy, loads of features, and reasonable value for money, the Escape Hybrid is not only the most compelling version of the Escape, it is a standout in the compact crossover segment. With the only comparable alternative being the Toyota RAV4 Hybrid, the Escape Hybrid fills an attractive space for those looking seeking a practical, economical, and feature-packed crossover.