Few things add cool factor to a car like a shot as the ride of choice for the world’s most revered action-flick spy, James Bond. It certainly worked for me a couple of decades back as I watched 007 star, Pierce Brosnan, drive an eye-catching, Atlanta Blue, BMW Z3 Roadster in the film Goldeneye. Bond would have a second go in a BMW roadster with the stunning Z8 in The World is Not Enough. The stardom was enough for me to take notice, but it wasn’t just the 007 connection. Whether it is the Z3, the Z8, or classics such as the 507 or 328, BMW roadsters have always had a timeless beauty and an appeal that’s hard to ignore.

After a few years absence, the Z4 Roadster has returned to the BMW lineup for a third generation. Roadsters are a bit of a hard sell in today’s market. The truth is that the Z4 only exists because Toyota wanted a new Supra sports car. The cost-sharing collaboration between the two brands resulted in the two mechanically identical cars. The major differentiator is the design. Larger and more muscular than the generations that came before it, the Z4’s styling is quite striking and distinctive with a strong road presence. It’s debatable whether or not the design will age as gracefully as the rest of the BMW roadster lineage, but only time will tell. 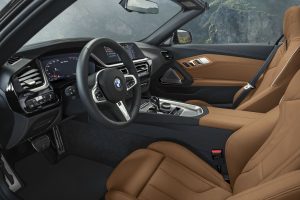 Aside from a pair of unique sport seats which are admittedly quite comfortable and supportive, the interior is essentially identical to that of any other BMW model. Although it would have been nice to see an interior as unique and special as the exterior, this is still a thoroughly enjoyable place to spend time. The digital gauge cluster, centre-stack controls, and iDrive infotainment system work just as well here as they do in a 3-Series. The driving position feels appropriately low-slung, and perfectly situated between the long hood and short rear deck for open-air enjoyment. To that end, the well-insulated power soft top folds in less than 30 seconds and at speeds up to 50 km/h.

Roadsters are all about the feel good factor, and the Z4 has plenty of it, most of which comes from the engine. The Z4 M40i is gifted with BMW’s outstanding turbocharged inline-6 tuned to 382 hp and 369 lb-ft of torque. 0-100 km/h comes in as little as 4 seconds. Quite simply, it is the perfect sports car engine, offering loads of power and buttery-smooth operation thanks to its inherently balanced design. It is also an aural delight with an intoxicating growl that’s accompanied by pops and bangs theatrics on the overrun when pressed. Just pass on the oddly-named sDrive30i entry-level model and its turbocharged 4-cylinder. The 6-cylinder M40i is the one that you want. 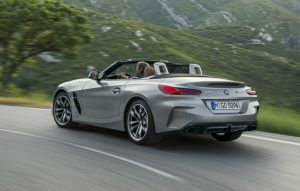 Sadly, the Z4 is missing one key roadster ingredient, and that is a proper manual gearbox. A shame given that a manual has traditionally been such a vital part of the BMW roadster formula, but an understandable sacrifice given the model’s low volume numbers. To its credit, the standard 8-speed automatic is a nicely balanced transmission that easily manages the two-faced task of offering smooth shifting automatic refinement as well as immediate shifts when desired.

Balance also very much describes the way it feels on the move. The Z4 is one of the few remaining BMW models with classic rear-wheel drive, and the benefits of that can be felt. The chassis manages to feel properly balanced and composed through corners, yet still compliant enough over real-world pavement. You even get a bit of electronic adjustability with settings from a laid-back Comfort mode all the way up to a hard-edged Sport Plus mode. An individual mode allows the driver to customize the engine, transmission, steering, suspension, and traction parameters in one single setting. 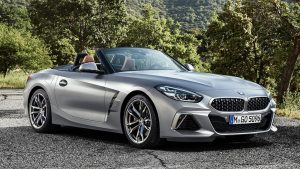 As an all-out sports car, the Z4 likely falls short of the sharper and lighter Porsche 718 Boxster for pure driver engagement. It’s just a tad too big and too heavy to manage the same kind of poise and handling at high pace. It’s a bit of a letdown when you consider that the Z4 is essentially the only dedicated sports car in the BMW lineup. If you want a sports car that’s comfortable and refined enough to use every day, however, the Z4’s setup may be the best compromise. Compared to the 718 Boxster, the Z4 M40i has a far more exciting and charismatic engine, offers more luxury and more features as well. The Jaguar F-Type Convertible offers a similar formula to the Z4, however, falls short when it comes to everyday comfort, interior room, and trunk space.

In a world becoming increasingly dominated by electrified vehicles and crossovers of all kinds, the fact that the Z4 even exists is something to celebrate. At $64,050 to start, or $77,000 for the more desirable M40i model, it is even reasonably priced when compared to the equivalent Porsche 718 Boxster or Jaguar F-Type. Either can easily exceed six figures with options. It is also more exclusive than those other models thanks to its relative rarity on the road which adds to its appeal. In the end, the Z4 is a thoroughly desirable luxury sports car that has certainly earned its place in BMW’s long-running roadster lineage.