The BMW 3-Series has long been considered the gold standard of the sport sedan segment which it pioneered decades ago. Even though there have been instances when it has veered away from its driver-focused roots, the latest generation represents something of a return to form for the 3-Series, placing it in a better position to face its increasingly competent sport sedan rivals. Although the 330i XDrive is an enjoyable ride when optioned with the appropriate M Sport equipment, the next-up M340i xDrive is an M Performance model designed for the true driving enthusiast.

It may not be a full-on M car (that title still belongs to the M3), but the M340i offers plenty of high performance equipment to make a pretty convincing alternative. The engine is one of BMW’s legendary inline-six cylinder units. With the help of a twin-scroll turbocharger, it produces an impressive 382 horsepower and 369 lb-ft of torque. The engine comes matched to an 8-speed automatic transmission and a rear-biased xDrive all-wheel drive system with a standard electronic limited-slip differential. The rest of the hardware, including the suspension, brakes, and variable ratio steering, are all M-tuned components as well. 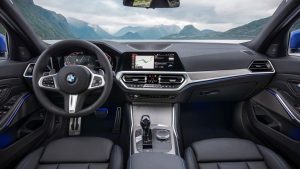 From a visual standpoint, the M340i differentiates itself from the 330i with a unique grill design, sportier-looking wheels, and larger dual tailpipes. The interior maintains the same luxury car atmosphere with high quality materials throughout. There are nice bits of aluminum and matte wood finish along with an optional leather-wrapped dashboard for that high-end look.  The sport seats are comfortable and supportive, and the steering wheel has a nice chunky feel to it. The iDrive infotainment system and digital gauge cluster take some getting used to, but the depth features and technology on offer is thoroughly impressive.

The M340i may be a much larger, heavier sedan than its highly-acclaimed predecessors, but the driving experience doesn’t seem to suffer as a result. The chassis is well-balanced with tightly controlled body motions thanks to the firmly-damped M Sport suspension. M Adaptive dampers are available, but I don’t feel they are really necessary. Though light on actual feedback, the steering is fairly precise and weights up nicely when Sport mode is selected. The all-wheel drive system works well with the electronic locking differential to help manage the power and launch the car out of corners with impressive speed. Runflat tires are available, however, I recommend passing on them in favour of the regular performance tires (Michelin Pilot Sport 4 S) due to their excellent grip and smoother ride quality.

As impressive as the handling is, the drivetrain is the real star of the show. BMW’s inline-six engines have earned a reputation as some of the best in the industry, and for good reason. The 3.0L unit is just so eager to rev with silky smoothness and refinement that’s worthy of a six-figure priced car. It also sounds great with outstanding power delivery and devilishly fast acceleration. 0-100km/h comes in as little as 4.2 seconds, which is firmly in sports car territory. It is a shame that a proper manual gearbox is no longer available, however, the automatic is well-tuned and designed to work in harmony with the engine and all-wheel drive system for better performance. 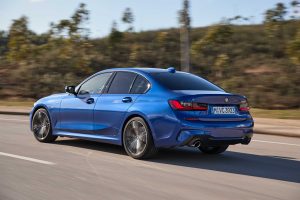 With its sports car-like performance and capability, the M340i has raised the bar for the 3-Series and moved it in the direction of a full-blown M car. Unfortunately, the pricing seems to almost mimic that of an M car as well. The starting MSRP is $61,850 and that can easily climb well into the $70,000 range after a number of desirable options have been added.  Yes, the pricing is in line with direct competitors such as the Mercedes-AMG C43 4MATIC, but even so, that’s an ambitious price tag for something as ubiquitous as a 3-Series, and quite the jump from the previous generation 340i as well. It is also significantly more expensive than an M240i Coupe, which offers the same hardware in a more playful, entertaining package. Yes, the M240i is a smaller-sized two-door coupe, but it is the more enthusiast-oriented model, and even offers the option of rear-wheel drive and a manual gearbox.

There’s no doubt that the M340i is an impressive sport sedan, and one that edges fairly close to BMW’s heavily-praised M models. Buyers will just have to decide whether the extra performance is worth the upcharge over the nearly as impressive 330i M Sport. Given that the M340i is positioned square between the 330i and the M3 in terms of performance and pricing, BMW’s strategy with its M Performance model makes sense. If you’re an avid BMW fan in the market for a four-door sport sedan and an M3 doesn’t quite fit your taste or budget, the M340i should have what it takes to satisfy.