The Volvo XC40 is the company’s smallest crossover model squeezing just beneath the larger XC60 and much larger 7-passenger XC90 in the lineup. That’s not to say that the XC40 is small. This is a properly useful-sized crossover that’s practical enough for most family and urban duties. In fact, the XC40 seems to prioritize versatility and practicality with all kinds of thoughtful design touches that help it stand out in a crowded segment.

The XC40 sits on the larger end of the subcompact crossover segment with a larger footprint and more interior space than key rivals such as the BMW X1, Jaguar E-Pace, and Lexus UX 200. I’m not sure whether I’d call it as stylish as its larger XC60 sibling, but there’s no doubt that it appears upscale with all kinds of interesting design details and available contrasting colours to add a bit of visual excitement. Most of all though, it has a charming youthful look that should mesh well with trendy urban types. 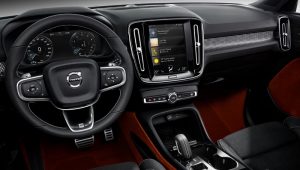 The upscale vibe continues into the cabin which is packed with impressive features, high-quality materials, and many thoughtful touches. The centre touchscreen uses the same tablet-like interface found in other Volvo products. It has its quirks and can be distracting to use at times, but it works well for the most part. The amount of space and use of materials is impressive, with my favorite detail being the denim-like material used for the headliner. The interior also comes packed with useful features, including door pockets large enough to fit laptops, a removable, washable garbage-bin in the centre console, and a spacious cargo area with a foldable grocery rack mounted in the cargo floor.

Like most of its pricier showroom siblings, the XC40 glides down the road in a refined manner with good ride quality and sound isolation from the outside. The smaller size when compared to other Volvo crossovers does make it feel a bit more nimble and maneuverable when hustled about, but this is still very much a crossover designed for comfort over performance. Safety remains a high priority as well with the company declaring that, by 2020, no one will be killed or seriously injured in a new Volvo car. Some of the XC40’s available safety equipment includes a sharp 360 degree backup camera as well as a semi-autonomous Pilot Assist system.

All XC40 models come equipped with a 2.0L turbocharged 4-cylinder engine matched to an 8-speed automatic transmission and all-wheel drive. The engine produces 248 horsepower and 258 lb-ft of torque, enough for decent straight-line acceleration. Different drive modes, including a dynamic mode, are available, but the XC40 never feels especially quick or sporty. Fuel economy though is reasonable. I managed to average 11.0L/100km in mixed city and highway driving with up to 8.0L/100km possible on long highway runs. 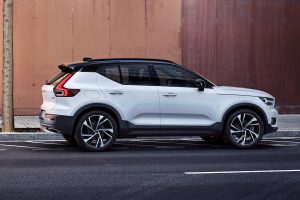 Pricing starts at $39,990 for the Momentum model and stretches up to $44,100 and $46,600 for the R-Design and Inscription models. With options, it’s possible to exceed an MSRP of $60,000, a point at which the XC40 becomes more expensive than a well-optioned XC60. Ambitious as that may seem, the pricing is more or less in line with many competing luxury rivals. Like competing European brands, Volvo’s are well-suited to a lease purchase, where long-term reliability and repair costs are less of a concern. For those who plan on purchasing for the long-haul, an extended warranty is advisable.

Although often stylish and convincingly upscale, many luxury subcompact crossovers ultimately lack the expected practicality and versatility that draws many potential buyers into crossovers in the first place. The XC40, however, seems to contradict this segment pattern with a useful amount of space and welcomed conveniences that help make it an appealing option. Those looking for a premium small crossover that prioritizes practicality and comfort will want to take this one for a test drive.