Volvo has traditionally been well known for its safe, boxy, station wagons. Even though the brand’s lineup has largely evolved into a sea of crossovers, Volvo continues to produce a few more traditional offerings for those who remember the brand for what it once was. The newly redesigned V60 is the latest in a long line of station wagons from the Swedish brand, and perhaps the most broadly appealing one yet.

Next to safety, the appeal of the latest Volvo models seems to come from their attractive Scandinavian designs. Just about everything the brand is dishing out is just plainly stylish with sophisticated design details. The V60 maintains the tasteful design language of its larger V90 sibling, only shrinking and tightening it down to a slightly smaller scale. Inevitably, the result of its smaller proportions is reduced cargo space and passenger room, but overall, this remains a very practical vehicle well-suited to workhorse family duties. 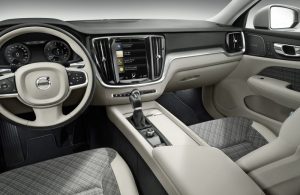 Despite being an entry-level model, the V60 seems to sacrifice very little, if anything, in terms of features and luxuriousness in exchange for a lower price tag when compared to the larger V90. The use of open-pore wood trim, neatly-stitched leather and aluminum accents is all very tasteful and upscale in appearance. The features list is quite extensive with niceties that include a large panoramic roof, 360 camera, and semi-autonomous safety aids such as Volvo’s Pilot Assist with run-off road mitigation. The system can effectively apply braking and steering input to maintain the vehicle within its lane while driving. Of course, if an accident were to happen, Volvo’s passive safety technology is some of the best in the industry.

Those looking for the safety benefits of all-wheel drive, however, will have to splurge for the up-level T6 model tested here. In addition to all-wheel drive, T6 models come equipped with a turbocharged and supercharged 2.0L 4-cylinder engine which produces 316 horsepower and 295 lb-ft of torque. Coupled to a smooth-shifting 8-speed automatic transmission, the engine produces plenty of power accompanied by a satisfying supercharger whine as it is being pushed. As nice as it is, most V60 buyers would probably be served just as well by the base T5 model’s turbo 2.0L engine. In addition to providing an ample 250 horsepower, this engine is also mechanically simpler than the rather complicated twin-charged engine in the T6, which may pay off in long-term repair expenses. Sadly, going with the T5 also means forgoing all-wheel drive, which is just unacceptable for a luxury vehicle at this price point.

The V60 is not only positioned as Volvo’s smallest model, but also its sportiest next to the S60 sedan. Though still largely a comfort-oriented vehicle, there’s no doubt that the V60 has a certain level of athleticism and handling ability not traditionally found in Volvo vehicles. The steering is relatively precise and responsive to inputs, and body control is impressive as well. Overall, it is still quite some way off from the best sport sedans in this segment, such as the BMW 3-Series and Jaguar XE, but there’s still some fun to be had when conditions call for it. 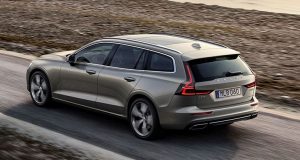 The starting point in the V60 lineup is the Momentum trim, which starts at $44,900 for the front-wheel drive T5 and $48,900 for the all-wheel drive T6. The T6 can also be had in the more lavishly equipped Inscription trim, which starts at $55,400. Like its S60 sedan counterpart, the V60 is eligible for the Care by Volvo program. This is an all-inclusive, subscription based plan which includes winter wheels, maintenance, road hazard protection and normal wear-and-tear all rolled into one flat-rate monthly payment. The subscription plan can be completed entirely online in as little as 10 minutes, and runs for a 24 month period with the option to upgrade to a new Volvo any time after the first 12 months.

The Volvo V60 may be competing in a relatively small segment, but there’s no denying its appeal. It delivers on style, luxury, safety, and sportiness in good measure, while also offering the practicality for which station wagons have been well known for. Not all is perfect with the V60. The lack of all-wheel drive on the lower-priced T5 model is a letdown. The touchscreen infotainment system is fussy and distracting to use while driving. And the pricing of the T6 models, as well as the Care by Volvo subscription plan, seems a bit ambitious as well. Still, for those shopping for a practical luxury vehicle that isn’t a crossover, the V60 is certainly worth a closer look.