As a pioneer of hybrid vehicle technology, Toyota has been making huge strides and, as of late, pushing to expand the availability of its fuel-saving electrified vehicles across its model range. With the price of gas on the rise and hybrid models becoming more affordable and effective than ever before, Toyota seems well-positioned to capitalize on the needs of consumers while simultaneously reducing the carbon emissions of its lineup. A great example of the brand’s latest efforts is the RAV4 Hybrid. Having already tested the regular gas-powered RAV4 and coming away mostly impressed, it’s time to see whether the hybrid model has enough going for it to be the pick of the range.

The RAV4’s hybrid system consists of a 2.5L 4-cylinder engine and electric motor powering the front wheels which combines with a second electric motor powering the rear wheels creating an all-wheel drive setup. Total system output is 219 horsepower, which is 16 more than the gas model.  The result is a respectable amount of power off the line with a nice torque boost thanks to those electric motors. The best part, however, is the fuel economy. Over my week-long test drive of mostly city driving, I averaged under 6.0L/100km, which is a dramatic improvement over the gas model’s figures, especially when it comes to stop-and-go city driving. 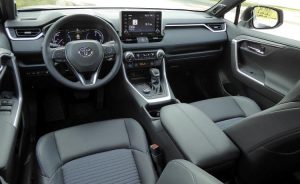 There’s little doubt that the hybrid is the most sorted of the bunch in the RAV4 range. The drivetrain is impressively smooth and seamless with none of the engine noise that plagues that gas model during hard acceleration. There are also no compromises to be made when it comes to interior space. The hybrid has the same amount of rear seat and cargo room as the gas model, which makes it one of the more spacious crossovers in its segment. The rear seats do fold, but unfortunately, the RAV4 Hybrid lacks the ability to fold the rear seats from the cargo area found on rivals such as the Mazda CX-5 and Honda CR-V. The rear doors also don’t open very wide which makes access a bit of a challenge.

The bottom line is that the RAV4 Hybrid is more powerful, more refined, and far more fuel efficient than its gas-powered equivalent. One would logically expect these benefits to come at a significant price premium as has traditionally been the case with other hybrid models. Amazingly, however, that isn’t the case here. The RAV4 Hybrid has a starting MSRP of $32,090 for the LE model, which only represents a $1,400 premium over the equivalent gas-powered LE AWD. This very modest price difference remains as you move up through the trim levels which maxes out with the $42,090 Limited model. The standard features list includes heated front seats, dual-zone climate control, a 7 inch infotainment display with Apple CarPlay (Android Auto is coming for 2020), and Toyota Safety Sense 2.0. 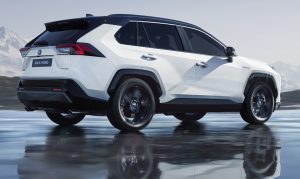 Unfortunately, the RAV4 Hybrid isn’t available in the cool and adventurous-looking Trail trim level like the gas model. There is, however, a unique XSE Package, which comes with a slightly firmer sport suspension and sharp-looking 18 inch wheels with a gloss black finish. They look great with the available colour contrasting paint options, such as the white pearl and black roof combination that my tester came finished in. For $38,390, the XSE model also includes sport front seats finished in Softex leather upholstery, an 8 inch infotainment display with SiriusXM and Entune Safety Connect, and 3 USB inputs on top of the regular XLE model features like a power liftgate, sunroof, smart key entry, and a heated steering wheel.

All things considered, the RAV4 Hybrid has more than enough going for it to make it the obvious choice for most RAV4 buyers. Not only do all the hybrid benefits come at a small upcharge, buyers will likely also benefit from higher resale value thanks to the hybrid’s greater desirability when compared to the gas models.  Toyota’s hybrid systems are also time-tested and well-proven in terms of reliability more so than those of any other automaker. Rivals would be wise to follow suit in offering competitive hybrid crossovers of their own. As it stands, however, the RAV4 Hybrid makes a very persuasive argument for going green, and the result is one of the most accomplished compact crossovers on the market.

By Shari Prymak Although full-electric vehicles are on the horizon, there is still work to be done in terms of making them affordable, accessible, and practical enough for the average consumer. Until that time comes, […]