Toyota has long been known for building cars that are reliable, dependable, and affordable to own, but often short on style or excitement. The brand’s highly popular Corolla model has traditionally been a good example of this. Although the latest variant is hardly the last word in driving fun, it’s clear that Toyota’s efforts to produce more stimulating cars have resulted in the most interesting Corolla yet.

The Corolla Hatchback wears sheet metal that’s surprisingly eye-catching for a Corolla. The headlights and taillights have a cool sculpted appearance that contribute to an overall aggressive look. The interior too is tastefully done with an impressive blend of materials used throughout. The dash and door panels are covered in soft materials with real contrast stitching along with gloss black and metal-look accents. Those who find technology intimidating should feel quite comfortable with the Corolla. The touchscreen is sharp-looking, easy to use, and surrounded by user-friendly buttons and knobs for commonly used functions. 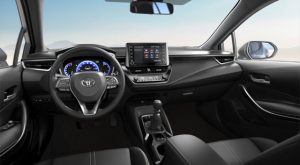 The newfound visual appeal is commendable, but not nearly as impressive as the driving experience. Unlike Corollas of old which were known for nothing more than just competent A to B transportation, the latest version actually makes an active effort at being fun to drive. The steering is precise with almost sports car-like responsiveness. Cornering behaviour is crisp and body motions are kept well in check. Part of that is thanks to a sophisticated for the class multi-link suspension arrangement which also helps deliver a fairly smooth ride over broken asphalt.  I didn’t expect the Corolla to be as fun to drive as it was, but there’s no doubt that it moved the bar forward for rival compact cars.

Toyota continues to resist the trend of complicated turbocharged engines and instead sticks with a more traditional, naturally-aspirated, 2.0L 4-cylinder unit.  Producing a healthy 168 horsepower and 151 lb-ft of torque, the engine is both adequately potent and highly fuel efficient. I averaged 8.5L/100km during a week of mixed city and highway driving. Transmission options consist of a standard 6-speed manual with an auto rev-match feature for smooth downshifts and an optional CVT automatic. The manual shifter is enjoyable to row through the gears and the auto rev-match on downshifts adds a fun sporty touch, but I found the clutch is a bit tricky to engage smoothly on take-off. 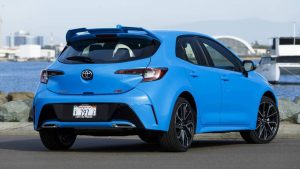 The Corolla Hatchback starts at $20,980 and includes features such as smart key with push-button start, Entune 3.0 audio system, touchscreen display with Apple Carplay compatibility (but no Android Auto), and several active safety features as part of Toyota Safety Sense 2.0. Though the range maxes out at $27,980 for the heavily-equipped XSE model, the SE Upgrade model hits a sweet spot with features such as wireless smartphone charging, a heated steering wheel, blind-spot monitoring, and 18 inch wheels all for $23,980. The CVT can be added to any model for $1,000 but comes standard on the top of the line XSE.

The hatchback segment is filled with excellent options including the Honda Civic Hatchback, Hyundai Elantra GT, and Mazda 3 Sport. The Toyota Corolla Hatchback should appeal to those who prioritize long-time Toyota hallmarks such as class-leading reliability and resale value, but still want a bit of style, fun, and value in their 5-door. I’m not sure whether it surpasses the sportier Mazda 3 Sport and more powerful Honda Civic Hatchback when it comes to ultimate excitement, but it’s definitely in the ballpark. It’s only serious drawback is a lack of rear seat space and cargo room, especially when compared to most rivals. If that isn’t a deal breaker, however, the Corolla Hatchback is among the best the segment has to offer and an easy top pick.