The terms crossover and SUV tend to get thrown around interchangeably these days, but the truth is that most crossovers today are simply not designed for the kind of treacherous off-roading that SUVs were once known for. The Toyota 4Runner, however, is different. This is a properly old-school, truck-based SUV that ignores the latest trends and instead maintains a sharp focus on its roots for being a rugged, durable, do-it-all adventure warrior.

The 4Runner certainly looks ready to take on anything with its angry-looking maw up front and chunky, rugged appearance. The TRD Pro model ups the excitement with a basket-style roof rack, matte black wheels with meaty all-terrain tires, a unique grill with “Toyota” prominently written across the front, and an available eye-catching Voodoo Blue paint hue. It’s big and imposing with just enough attitude to be taken seriously. My favorite exterior feature is the power retractable rear window which adds a bit of extra convenience for loading cargo as well as provides a nice breeze throughout the cabin while driving. 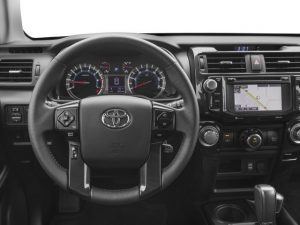 In an age where car interiors are becoming dominated by fancy touchscreens and high-tech features, the interior of the 4Runner comes off as refreshingly old-school. It may lack many modern features expected at this price point, but it also retains a lot of traditional features that you just can’t find elsewhere. The engine fires up with the turn of a key rather than the push of a button. The transmission and two-speed transfer case are controlled with chunky, mechanical shifters. All of the main controls use large, simple buttons and knobs that can be operated while wearing gloves like a true off-roader. Space both up front and in the back is excellent, and the cargo area is large enough to swallow a weekend’s worth of adventure gear.

Although the 4Runner could conceivably be used as an everyday family hauler, using it exclusively for that purpose would be a waste of its true potential. This is a proper off-roader that begs for some rock-crawling escapades. The TRD Pro model is especially capable with heavy-duty FOX suspension, an aluminum front skid plate, locking rear differential, multiple terrain modes, and a 4-wheel crawl control system which works like a low-speed cruise control for off-roading. Backing up all that serious hardware is a time-tested 4.0L V6 engine and 5-speed automatic transmission designed to get the job done reliably, if not efficiently. Indeed, I averaged a pretty dismal 17.5L/100km during my brief time with the 4Runner. 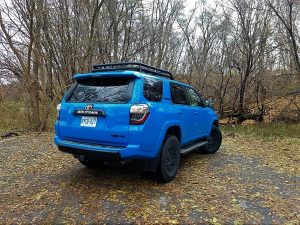 At $46,155 to start, or $56,580 in TRD Pro trim, the 4Runner comes off as rather pricey for a vehicle lacking modern conveniences and active safety technology that can be found on a base model Corolla. To criticize the 4Runner for a steep price tag, a lack of features, or poor fuel economy, however, would be missing the point. As a pure rational-based purchase, the more practical, efficient, feature-packed Highlander makes a far more convincing case for less money. The 4Runner is designed for those looking for more personality and capability in their 4x4, and they are willing to pay for it.

Those willing to make the plunge will be rewarded with a properly old-school, characterful, driving experience that you just can’t find in other vehicles. The Jeep Wrangler is the only alternative with the same off-road capability and even more excitement thanks to a removal roof, doors, and windshield. The Wrangler, however, is even more compromised when it comes to daily usability, and, although it matches the 4Runner’s outstanding resale value, it lacks its long-running reputation for durability and no nonsense reliability. Toyota’s insistence on not messing with the formula and keeping the 4Runner what it always has been has resulted in a uniquely capable, livable, and ridiculously rugged 4x4 that’s truly worthy of the SUV acronym.