Unlike some other brands which seem to constantly be reinventing themselves and reworking their model lineups in response to the latest trends, Subaru has a very clear understanding of what it is and what it isn’t. The company knows that its growing success is based around a consistent dedication to a set of core values, some of which include ruggedness, safety, and function over form. There’s very little glitz and glam in a Subaru showroom, but that’s not what the brand’s winning formula is about. Fans know exactly what they are getting, and if what you want is a reliable, sensible, well-engineered crossover, there’s little reason to look much further than the Subaru Forester.

Though now in its fifth generation, you’d be hard-pressed to tell the difference between the latest model and its predecessor based on styling alone. Subaru hasn’t messed with what works, and there isn’t much styling to speak of really. Although the Sport model tested here adds some orange trim, black wheels, and other sporty details to add a bit of visual interest, for the most part, the Forester range is about as interesting to look at as a cardboard box. 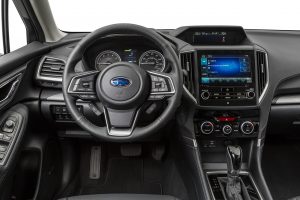 Thankfully though, the lack of style is more than made up for by its satisfying and functional interior. Storage spaces for small items are plentiful. The fit and finish of the interior materials is excellent. And most of the controls are intuitive and easy to operate. The touchscreen infotainment system has one of the better interfaces that I’ve seen with a clear menu structure, thoughtful details such as the ability to rewind satellite radio stations, and both Apple Carplay and Android Auto compatibility. Spaciousness is quite impressive as well. Four adults will have no problem sitting comfortably and five could manage in a pinch. The cargo area too is a generous size with useful touches such as hooks for grocery bags, though it lacks the useful pull handles for collapsing the rear seats which can be found in a few rivals.

Despite having the “Sport” designation, I can’t say that the moniker adds any excitement or sportiness to the driving experience. With a torque vectoring system and the surefootedness of full-time all-wheel drive, the Forester can take a corner just fine, but this is a vehicle that is really more about comfort and stability than handling and agility. Though it drives perfectly fine, the Forester’s real advantage over rivals is its stellar outward visibility. Sightlines all around are excellent thanks to tall glass and relatively thin pillars, which help inspire confidence behind the wheel. Speaking of confidence, the Forester can also do the offroading stuff better than most thanks to a selectable X-Mode and Hill Descent Control designed for trickier terrain and control down steep declines.

Regardless of the version you go with, the drivetrain consists of a 2.5L 4-cylinder boxer engine matched to a CVT automatic transmission. With 182 horsepower and 176 lb-ft of torque, the engine is far from powerful, but adequate under most circumstances with an acceptable level of refinement. I wish the same could be said for the engine start stop system, which is quite jarring when it activates at stoplights. Thankfully, it can be switched off. The CVT, on the other hand, works smoothly and seamlessly without fuss. Fuel economy for the week landed at 12.5L/100km in the city and the best I could manage was 8.5L/100km for a long highway run, which is a tad higher than the best in class. 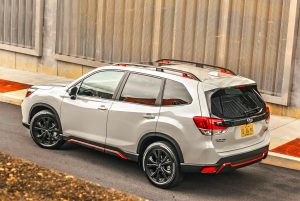 The Forester lineup has a starting MSRP of $27,995 which includes features such as heated front seats, climate control, and an Apple Carplay and Android Auto capable touchscreen infotainment system. Those looking for the latest active safety features will have to step up to the $31,795 Convenience with Eyesight model, which adds a camera-based suite of safety features including forward and reverse automatic emergency braking, lane departure warning, and adaptive cruise control. Although the range tops out at $39,495 for the Premier model, the lower-priced Sport and Limited models seem to hit the sweet spot in terms of balancing desirable features with value for money. Rather annoyingly, however, Subaru makes you go all the way up to the Limited model for a heated steering wheel, which seems rather stingy.

Those in the market for a well-rounded compact crossover would be wise to take a close look at the Forester. There isn’t much style or excitement to speak of and the lack of regular sales incentives means that there is a price premium when compared to rivals. When it comes to the fundamentals, however, few crossovers can match the Forester’s compelling blend of practicality, functionality, safety, and ease of use. And with its historically strong reputation for reliability and high resale value, there’s little reason to second guess the decision. It doesn’t stand out on the streets, but it’s a standout in terms of execution, and that makes it an easy recommendation.