Most think of Porsche as a sports car company, but the sales numbers actually paint a very different picture. The brand’s Cayenne and Macan SUVs are far and away the best selling models and have been for quite some time. Porsche has really become an SUV company that just so happens to build 911s and other sports cars to remind everyone what they used to be about. The great thing about the Cayenne, however, is that, even though this is the largest, most family-oriented, vehicle in the Porsche lineup, it still offers plenty of reminders that, at the end of the day, it is still a Porsche.

Now in its third generation, the latest Cayenne is the largest one yet. Despite a small increase in size over the prior generation, the weight has actually gone down thanks to liberal use of aluminum, high-strength steel, and other lightweight materials. The design itself is clean and modern, yet still very much a Cayenne. Eye-catching details include the LED light bar that runs across the length of the tailgate while also integrating the Porsche name using 3D letters. It’s a subtle detail, but a very cool one.

The modern theme carries into the cabin with a pair of displays which flank the analog tachometer in the gauge cluster, a widescreen 12.3 inch infotainment system, and touch surface controls covering the centre console. The most effective of the lot is the infotainment system with its visually appealing graphics, clear menu structure, and high level of responsiveness. The high resolution camera system is also one of finest on the market. The touch surface controls, on the other hand, are less convincing. They are tricky to use on the move and the gloss black finish means that dust and fingerprints will be tough to avoid. 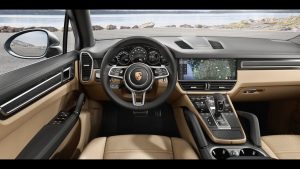 The interior materials are just as nice as you’d expect them to be with excellent fit and finish and attention to detail. The front seats are incredibly comfortable and supportive with a good range of adjustability. The rear seats offer plenty of room for two adults to sit comfortably and be can reclined for added comfort. Despite its large size, the Cayenne remains strictly a five-passenger vehicle, which means that the cargo area is quite spacious as well.

The Cayenne is available in a few different flavours, including a plug-in E-Hybrid model, a spicier S version with a 440 horsepower, twin-turbocharged V6 engine, and a missile-fast Turbo model with a 550 horsepower, twin-turbo V8. The entry-level version uses a single-turbo 3.0L V6 producing 335 horsepower and 332 lb-ft of torque, which comes matched to a quick-shifting 8-speed Tiptronic automatic transmission. The engine is smooth and punchy with plenty of low-end torque for quick take-offs. It offers just the right amount of performance without going overboard. In terms of fuel economy, I averaged 14.0L/100km in mixed city and highway driving, and it will go the distance thanks to a large 90L fuel tank.

There are a number of high-end SUVs that handle and perform far better than a 4x4 has any right to, but the Cayenne seems to pull off this engineering witchcraft better than most. Even without the available adaptive air suspension and electronic stabilizer bars which come as part of the Dynamic Chassis Control system, my tester still felt about as sharp and stable through corners as a finely-honed sport sedan. Push it with a little enthusiasm and you quickly forget that you’re piloting a big, heavy, family hauler. It’s so well balanced and capable that I wouldn’t be surprised if it could embarrass a few sports cars around a circuit.

Even though it would probably be total hoot, tossing a Cayenne around a racetrack is about as likely to happen as sending one through an off-road trail. If the latter were to happen, however, this 4x4 would be prepared. An off-road button lets you cycle through Mud, Sand, Gravel, and Rock modes to optimize the all-wheel drive system for different conditions. It’s hard to imagine one vehicle being capable of delivering sports car like handling, Jeep-like off-road ability, and even truck-like towing capability (3,500 kg), but the Cayenne somehow manages to do it all in perfect harmony.

Pricing for the Cayenne starts at $75,500 and can quickly skyrocket from there with options. Although a modestly equipped Cayenne can be comparable in price to rival models such as the BMW X5 and Range Rover Sport, it would take some very strategic maneuvering through the options list to keep it within the same ballpark. Compared with the equally sporty, though largely inferior, Maserati Levante, however, the Cayenne comes off as serious value.

Car enthusiasts often express their lament for Porsche’s decision to introduce the Cayenne, arguing that it is not a “real” Porsche. The reality is that the success of the Cayenne and the profits that it generates funds the development of the special low volume cars like the GT3 and 918 Spyder that we all love. Porsche produces more sportscars now than ever before, and we have the Cayenne to thank for that. It may not be revered like the 911, but let’s give credit where credit is due. This is one Porsche that’s definitely worthy of praise.