There was a time when the C-Class was considered the entry point to the Mercedes lineup.  It was the most affordable way into Mercedes ownership, and perhaps a stepping stone to one of the more expensive models. With the smaller A-Class and CLA-Class taking its place as the entry-level models, the C-Class has now evolved into more of an upscale offering with more luxury, technology, and presence than ever before.

Mercedes has long been criticized for building sedans in different sizes which all share the same basic design. The C-Class can certainly be accused of this thanks to a design that mimics that of the larger E-Class and S-Class sedans. The major benefit of this, however, is that you end up getting much of the elegance and on-road presence of those larger models at a far more attainable price point. It may be a bit bulbous and reserved in appearance, but it is still a stylish sedan that won’t be mistaken for anything other than a luxury car with a three-point star. Those looking for something a bit edgier and sportier have the far-shapelier CLA four-door coupe to consider. 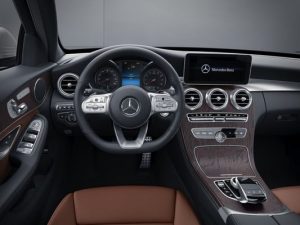 Like the exterior, the interior is filled with touches to make you feel like you’re in a much more expensive model. Ornate details such as the metal speaker grills and silver-finish controls can be found everywhere, and give the interior a more upscale atmosphere. The optional open-pore wood trim is an elegant touch as well, and a much better alternative to the standard gloss black which can easily attract scratches and fingerprints. A bit less impressive, however, are the front seats, which are not as comfortable and supportive as the sport seats found on a BMW 3-Series or Lexus IS. The rear seats are also a tad tighter than what you might expect given the generous exterior dimensions.

Technology-wise, the C-Class offers a wide range of semi-autonomous features as part of an Intelligent Drive Package. This includes GPS-guided adaptive cruise control which can adjust the vehicle speed for curves and intersections. There’s also Active Lane Change Assist which can perform a full lane change maneuver with the flick of the turn signal. An available infotainment system includes a 10.25 inch high-resolution display and Mercedes’ COMMAND system with touchpad controls. It’s a visually appealing system with an incredible depth of features to explore, however, it does require a significant amount of time to master and can be distracting to use on the move. Apply Carplay and Android Auto does help ease the confusion, but it would be nice to see a more straightforward interface.

The C 300 is the entry-level model and comes equipped with a 2.0L turbocharged-four matched to a 9-speed automatic transmission and 4MATIC all-wheel drive. The engine’s 255 horsepower and 273 lb-ft of torque rating allows for surprisingly brisk acceleration, particularly when dynamic mode is selected. Despite the number of gears, the transmission does its thing rather seamlessly and intelligently. Less refined is the engine start-stop system, which is bit jarring in its operation.  I wouldn’t miss the few pennies in gas it might save and would just keep it off.  In terms of fuel economy, I averaged about 11.0L/100km in mixed city and highway driving, but up to 7.5L/100km is possible on longer highway runs. 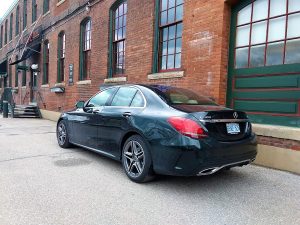 From a ride and handling standpoint, I was expecting the C 300 to be the antithesis to the many sport sedans on the market, but that isn’t the case. The ride quality is definitely on the firm side, especially with the sport suspension that’s a mandatory part of the Sport Package and all its appealing AMG garnishes. Cornering is surprisingly sharp with excellent body control and steering response. It feels like a real sport sedan, though I’m not sure whether that should really be the C 300’s mission. Leave the sporty pretensions for the rowdier AMG variants like the C 43, or even the smaller CLA. Mercedes ought to have at least one smaller sedan that focuses on pure comfort and refinement, and the C 300 should really be the one.

Pricing for the C 300 begins at $46,100 and can go north of $60,000 when equipped with desirable options such as the Intelligent Drive Package, Burmester surround sound system, head-up display, and the mandatory packages for the better infotainment system with 360 camera and Active Park Assist. That’s just about in line with the comparable BMW 330i, but pricier than a Lexus IS 300 or Genesis G70. With its predictably high operating costs, this is a model best considered as a lease purchase where the payment options are more competitive and long term expenses are less of a concern.

The C-Class has become a ubiquitous entry-level luxury sedan and for good reason. With its shrunken E-Class appearance, strong performance, and outstanding interior, it manages to offer most of the luxury car experience of its larger showroom mates at a more attractive price point. It can even be had in alternative body styles, including a wagon, 2-door coupe, or a convertible for those who prefer. A more user-friendly infotainment system and better ride quality would certainly amplify its luxury car credentials. As it sits, however, the C-Class is a well-rounded option for fans of the three-pointed star.