The idea of a coupe being anything other than a sporty car with two doors may sound odd to most, but it is one that Mercedes has put to great effect across its lineup. The brand offers stylized coupe versions of four-door sedans and even fastback-style SUVs with sporty, sloping rooflines. This trend has spread to other brands as well, with just about every major player having now accepted Benz’s expanded definition of what a coupe can be. All of it can be owed to the trailblazing Mercedes CLS.

The CLS shares its underpinnings with the E-Class sedan but with far sleeker, sportier sheetmetal. It has a far more expressive and stylish look when compared to the somewhat bland-looking E-Class, and one that gives it a more distinctive flavour. The low, rakish roofline and frameless doors help validate its distinction as a four-door coupe. The AMG model tested here gets a more aggressive fascia and wheel design plus quad exhaust tips for that extra sporty appearance. 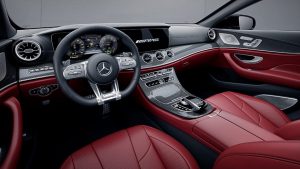 Despite being a rather sizable car, its coupe-like appearance means that rear seat room is a bit tight for tall adults. Other than that, however, the interior is typical high-end Mercedes with beautifully finished materials, striking design, and an impressive amount of technology. The dual-screen infotainment system is just as overwhelming to use here as in other Mercedes models, but the graphic design, screen resolution, and depth of features are extraordinary.  AMG touches include a beautifully-designed steering wheel and aggressively bolstered sport seats with an extensive range of settings. Naturally, there are several soothing massages to choose from, along with endless settings for everything from the coloured ambient lighting, screen layouts, head-up display, to the active safety systems.

The drivetrain consists of a turbocharged 3.0L inline-six with a hybrid assist system called EQ Boost, a 9-speed automatic transmission, and 4MATIC all-wheel drive. In AMG 53 guise, the engine produces a strong 429 horsepower and 384 lb-ft of torque with an electric supercharger adding up to an additional 21 horsepower and 184 lb-ft of torque. The 0-100km/h mark can be reached in as little as 4.5 seconds with an exceptionally smooth power delivery that’s characteristic of an inline-six. The engine’s integrated starter-generator also allows for one of the most seamless engine start stop systems with none of irritating vibration typical of this feature. Fuel economy is reasonable as well considering the power output. Up to 8.5L/100km is easily doable on longer highway runs.

The AMG-tuned 4MATIC all-wheel drive system is able to instantly vary the torque distribution and send as much as 100 percent to the rear wheels. Combined with grippy tires and a firmly damped adaptive air suspension system, the CLS 53 delivers minimal body motions and surprisingly sharp handling for a large four-door. The trade-off, however, is a rather jittery ride that’s easily unsettled by rough pavement even in the Comfort setting. Those looking for ultimate refinement and comfort will be better served by an E 450 sedan equipped with the Luxury Package and its comfort suspension setup. The AMG CLS 53 may seem like the obvious choice for the performance-minded enthusiast seeking a four-door coupe, but then that’s a bit questionable as well. Confusingly, Mercedes also offers an AMG GT 53 four-door coupe, which would appear to be the clear performance champ of the pair given that it shares a platform with its two-door sports car cousin. 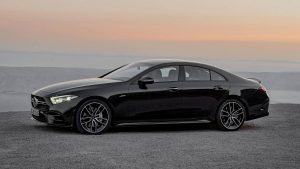 Pricewise, the CLS finds itself caught between its accomplished siblings as well. The AMG CLS 53 starts at $92,000, with my tester coming in at $109,850 with all the desirable options. That’s about $10,000 more than a comparably-equipped AMG E53 sedan, and, coincidently, about $10,000 less than a comparable AMG GT 53 four-door coupe. Those considering a CLS, however, are likely after the appearance more than anything else, and if that’s the case, it is worth mentioning existence of the entry-level CLS 450 4MATIC. For a starting price of $81,000, you get the same looks, same engine (in a slightly detuned form), and the same features as the CLS 53 at a more attractive price point.

It would appear then that the Mercedes AMG CLS 53 finds itself in a tricky spot. Those after an entertaining four-door sedan have the less expensive AMG E53 to consider, which is not only available as a sedan, but also a proper 2-door coupe, cabriolet, and wagon as well. It is also made redundant by the availability of the equally stylish, but presumably more capable AMG GT 53. Spoiled for choice as Mercedes shoppers may be, I can’t remember when having more choices of stylish performance cars was a bad thing, especially when they come as eye-catching and lavishly equipped as the CLS.