The Mazda 3 has helped solidify Mazda’s reputation as a builder of cars that are sporty to drive and economical to own. In addition to offering finely-honed driving dynamics and fuel-saving SkyActiv technology, the 3 is also largely responsible for introducing the idea of equipping affordable cars with premium features. The original 3 was the first in its segment to offer features such as heated seats and leather upholstery. The latest version takes this concept one step further, moving the model upmarket and distancing itself from mainstream rivals with a more upscale feel, advanced technology, and even available all-wheel drive.

Mazda continues to offer the 3 in sedan and sport hatchback body styles. The sedan will likely be the more popular of the two thanks its more agreeable styling over the somewhat oddly-shaped hatchback. Though there’s nothing particularly striking about its appearance, the smoothly-sculpted body and sharp-looking details in the lighting and front fascia do give it an attractive, sporty-looking appearance. Even the keyless remote has an upscale look to it, though I did find that the touch-sensitively of the advanced keyless entry system to be hit and miss in terms of its operation. Mazda has also chosen to limit this popular feature to the top-of-the-line GT Premium Package model, which is a bit unusual. 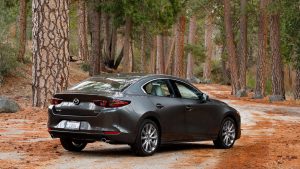 The interior is where the Mazda 3 really impresses most with its near-luxury level use of materials, fit, and finish. Most of the surfaces are covered in rich-looking materials with fine details that are normally reserved for far more expensive vehicles. The digital gauge cluster is clear and attractive, and the optional head-up display offers extensive information regarding vehicle speed, navigation routes, and safety alerts. The infotainment system uses an 8.8 inch display which is controlled using a rotary dial on the centre console. Though graphically pleasing and responsive to inputs, the menu structure is not very intuitive and simple tasks such as changing radio stations takes far too many steps. Things aren’t so bad, however, once you’ve set your favorites, and, thankfully, the system is compatible with Android Auto and Apple Carplay.

The Mazda 3 has long been known for offering a sportier driving experience than most rivals, and the latest version is no different. Flinging it into corners is joy thanks to tightly-controlled body motions and responsive steering that offers nice heft and feedback. The switch from a multi-link rear suspension system to a simple torsion beam plus increased soundproofing material has helped to improve ride quality and sound isolation when compared to previous models. The result is a driving experience that’s as solid and refined as it is sporty and agile. 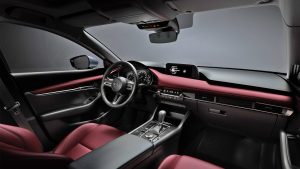 The advanced all-wheel drive system distributes torque to the appropriate wheel with the goal of enhancing performance. It is an option on models equipped with the 2.5L engine and 6-speed automatic transmission combo and a very desirable one. Lower models come standard with front-wheel drive, a 155 horsepower 2.0L engine, and a 6-speed manual as well. The 2.5L SkyActiv engine performs fine, but it lacks the shove suggested by its 186 horsepower and torque figures. Fuel economy, however, is decent with my tester returning up to 7.0L/100km on the highway and around 10.5L/100km in the city. Models equipped with front-wheel drive and the smaller engine should manage even better numbers.

Pricing for the Mazda 3 starts at $18,000 for the sedan ($20,300 with the practically mandatory Convenience Package) and $21,300 for the hatchback. Although the price can easily top $30,000 in GT trim with extras, the sweet spot in the range for most will likely be the mid-level GS with front-wheel or all-wheel drive. When equipped with the Premium Package, the $26,500 GS sedan includes desirable features such as leatherette upholstery, a 10-way power-adjustable driver seat with memory settings, sunroof, heated steering wheel, and several i-Activsense safety features. All-wheel drive can be added to either the GS or GT model for $1,700. 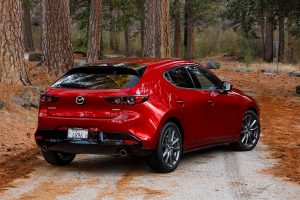 The Mazda 3 is priced a tad higher than traditional competitors such as the Honda Civic, Toyota Corolla, and Hyundai Elantra. Then again, its newfound upscale persona helps to elevate it to a level beyond that of the mainstream competition. With its premium-feeling interior, solid driving dynamics, and all-wheel drive capability, the 3 feels like it could make a suitable alternative to an entry-level luxury car such as an Acura ILX, Audi A3, or Mercedes A-Class. For something with humble economy car roots, I can’t think of higher praise than that.