In an effort to broaden their appeal, more and more luxury automakers are stretching down market into more affordable territory by slapping luxury car badges onto small car platforms. Indeed, it is no longer beneath any automaker to turn a front-wheel drive economy car into something worthy of a luxury badge. In the case of the UX, what Lexus has done is mold the underpinnings and drivetrain of the Toyota CH-R and Corolla Hatchback into a subcompact luxury crossover. In a way, this is a genius move, as you get the simplicity and efficiency of some of Toyota’s most affordable, reliable models, cloaked in a far more upscale package, likely without anyone ever knowing. What matters is that it delivers the luxury car experience that Lexus buyers expect.

As the most affordable model, the UX represents the entry point to the Lexus lineup. It sits just below the popular NX crossover with a smaller footprint and a smaller price tag. It also shares that model’s somewhat adventurous styling with heavily-creased, sculpted body lines and aggressive-looking details. Although it looks more like a hatchback, Lexus insists that the presence of body-cladding, a slight lift in ride height, and the availability of all-wheel drive make it a crossover. Unfortunately, weak packaging and a small size mean that crossover-like practicality is not its strong suit. The rear seats are difficult to access and very cramped. The cargo area is on the small size as well with a narrow opening and a strangely high lift over height for cargo access. 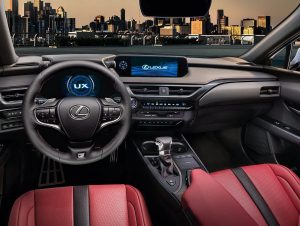 Despite its entry-level status, the UX certainly has a very Lexus-like atmosphere from the driver’s seat. The interior materials, fit and finish are identical to what you would find on far more expensive Lexus models. The steering wheel feels great to grip in hand, the digital F Sport instrument gauge looks fantastic, and the front seats are incredibly comfortable and supportive. The infotainment system uses the Lexus remote touch interface, which is just as confusing and distracting to use as ever. Thankful, you do get straightforward toggles for climate control and scroll wheels on the center console for quick audio system adjustments. The infotainment system is compatible with Apple Carplay, but not Android Auto.

The UX 200 comes equipped with the same drivetrain that you would find in the Toyota Corolla. The naturally-aspirated 2.0L engine produces a modest 169 horsepower and powers the front wheels through a continuously variable transmission (CVT). The power is about adequate but nothing more, even with the sharpened throttle response of Sport mode engaged. At least with economy car-like power you get economy car fuel efficiency. My tester returned about 9.5L/100km in the city and up to 6.5L/100km on the highway all on regular-grade fuel. The real fuel economy champ, however, is the up-level UX 250H, which uses a slightly more powerful hybrid powertrain to achieve an average of about 7.5L/100km. The hybrid is also the only way of getting a UX with all-wheel drive thanks to the addition of an electric motor on the rear axle.

Driving the UX 200 is a rather pleasant experience, particular around town where its small size and short wheelbase make it a breeze to maneuver and park. Those same qualities combine with the well damped suspension and accurate steering to provide an agile feel around corners. Thankfully, the athleticism doesn’t come at the expense of ride quality or refinement. The suspension does a fine job of absorbing bumps and the cabin is suitably quiet at cruising speeds. 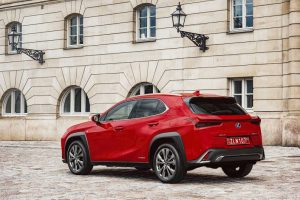 It is difficult to call a luxury vehicle good value for money when the economy car on which it is based can be had for far less. The UX, however, does make a case for itself when compared to its German rivals. The UX 200 FWD starts at $37,100 and comes in at $39,400 when equipped with the F SPORT Series 1 Package. The UX 250H AWD begins at $39,700 and can climb up to $48,500. All UX models come equipped with a range of active safety features which often cost extra on rivals. In order to get desirable extras such as navigation, ventilated seats, wireless smartphone charging, and a power lift gate, you’ll have to splurge for one of the higher packages on the hybrid model. Even so, the UX should still undercut the equivalent Mercedes GLA or BMW X2 by a decent margin.

The UX is somewhat constricted by its economy car roots which create certain limitations in terms of space, practicality, and straight line performance. For those who can overlook these shortcomings, however, the UX does the luxury car thing rather well. With the brand’s strong reputation for reliability and the efficiency of the drivetrains, it should also prove to be one of the most affordable luxury vehicles on the market from an operating standpoint as well.  There are certainly other crossovers that offer better value for money, but if you simply must have that luxury badge, the UX is one of the most effective and affordable ways to do it.