Although Lexus has long been known for building comfortable, reliable, luxury cars, the brand has followed the rest of the market with a focus on crossovers and SUVs. The NX represents the brand’s compact crossover offering and it has quickly grown into one of the most popular models in the lineup. Although it shares its underpinnings with the Toyota RAV4, the NX is very much a Lexus in every way that counts, including design, refinement, build quality, and luxury. It takes everything that made its big brother, the midsized RX crossover, so popular, and condenses it into a smaller, sportier, more affordable package.

The NX manages to make a bit of a statement thanks to its bold, angular, even somewhat polarizing design. Although its sharp-edged styling may not be to everyone’s taste, it certainly gives the NX a rather sporty appearance that helps set it apart from the many generic-looking crossovers on the market. Despite looking like a sizable vehicle, however, the interior space is not as generous as you might hope. Legroom and headroom can feel tight for taller passengers and the cargo area is less spacious than many rivals. Sightlines are also somewhat restricted by narrow glass as a result of the shapely exterior styling. 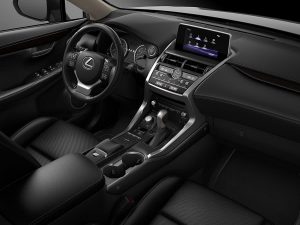 Although a bit confining for some, the interior certainly delivers the luxurious atmosphere and build quality that Lexus are known for. The fit and finish of the materials is a major highlight along with the excellent sport seats which are some of the most comfortable and supportive in the segment. The instrument panel is oddly shaped, but most of the controls are easy enough to master. Unfortunately, the same can’t be said of the infotainment system, which is quite distracting and confusing to use. The screen is controlled by a track pad which is imprecise and just illogical when compared to a dial or touchscreen system found on many rivals. The menus are also a bit of a mess and just barely saved by the availability of Apple Carplay. Sadly, there is no Android Auto.

Despite its sporty appearance, the NX 300 isn’t exactly the sports car of crossovers from behind the wheel. It takes corners well enough but there is nothing especially sporty about the way it drives. On the flip side, the ride quality is commendable and the cabin is fairly hushed even at high speeds. The drivetrain consists of a turbocharged 2.0L engine matched to a 6-speed automatic transmission and all-wheel drive. With 235 horsepower and 258 lb-ft of torque, the NX 300 feels fairly spritely off the line, especially with Sport S or Sport S+ mode engaged. Fuel economy is decent as well with my tester returning an average of 11.5L/100km in mixed city and highway driving. For those looking to maximize fuel savings, a hybrid-powered NX 300h is available as well. 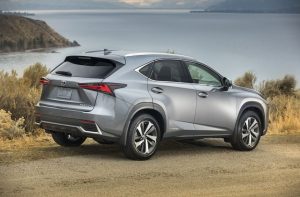 The NX lineup starts at $44,050 for the gas model and $51,250 for the hybrid. My tops-spec NX 300 F Sport Series 3 tester carried an MSRP of $57,300, but you don’t need to go anywhere near that figure to get a well-equipped model. For $51,450, the F Sport Series 1 includes features such as heated and ventilated seats, a heated steering wheel, and many F Sport goodies. You also get plenty of active safety technology including blind-spot monitoring with rear cross traffic alert, automatic emergency braking, lane departure warning, and adaptive cruise control. The NX appears well-priced next to rivals such as the BMW X3 or Mercedes GLC, however, it is a tad pricier than a comparable Acura RDX or Infiniti QX50.

For those in the market for a luxury crossover, the Lexus NX is an excellent option. The NX 300h, in particular, has the unique appeal of being one of the few hybrid offerings in the segment, making it a standout for eco-minded buyers. For those looking for a lower purchase price, however, the regular NX 300 is a great choice as well, and one that’s easy to recommend thanks to the brand’s strong reputation for reliability and high resale value. With its polarizing design, a somewhat tight interior, and a complicated infotainment system, the NX does have a few issues to contend with. For the most part, however, this remains a well-designed crossover that delivers on the luxury crossover experience.