We often hear that Tesla is making waves in the market and that the electric vehicle tsunami is coming. Despite the hype though, major automakers have yet to release an antidote to Tesla and make good on the EV front. When it comes to established luxury automakers, who would have guessed that little-old Jaguar would be the first to bring a fully-electric vehicle to market? Surprising as it may be, the Jaguar I-Pace will just have to satisfy any EV cravings until the bigger players get their acts together. Fortunately, that’s no punishment because, as it turns out, the I-Pace is quite an impressive vehicle.

The I-Pace is positioned as a small crossover similar in size to the compact E-Pace, but with the aesthetics of a swoopy hatchback. The design is a fresh take on the crossover look with a cab-forward cockpit and proportions different than that of any internal combustion vehicle. There’s really nothing else quite like it and it certainly makes positive statement out on the road. Sharp-looking details such as the aggressive headlights and raked roofline give it a sporty look that’s unmistakably Jaguar, though in a fresh, unique way. 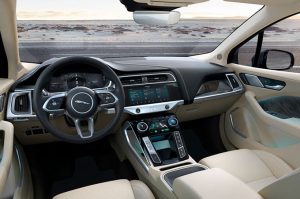 Despite its small exterior, the I-Pace has a surprisingly spacious cabin and cargo area. Three in the backseat will be a squeeze, but other than that, there isn’t much to complain about. Storage spaces and USB ports for devices are plentiful. The materials used throughout are up to the typically high Jaguar standard. Technology is impressive as well with the gauges and controls being operating through high-graphic displays. The infotainment system consists of a large 10 inch touchscreen used primarily for audio, phone, and navigation duties. Below that sits a 5 inch touchscreen used for climate control and seat functions. Both screens are quite visually striking and are fairly straightforward to use while stationary. The most fascinating bit are what Jaguar calls the multi-function dynamic dials, which are rotary dials with displays that can change between temperature, seat, and fan speed controls. Very cool.

Another nice touch is the pre-conditioning feature, which allows you to warm the cabin ahead of your drive while the vehicle is charging. It proved to be quite useful with the polar vortex-like weather I experienced during my week-long test. It’s no secret that freezing temperatures have a significant impact on EV range, and the I-Pace is no different. With a full charge taking approximately 13 hours on 240V level 2 power, the I-Pace was able to complete about 250km of winter driving before depleting its 90kWh battery pack. Under ideal conditions, Jaguar claims that up to 377km of range is possible, which is reasonable, through still far less than the 475km range of the Tesla Model X 100D. Even the half as expensive Hyundai Kona Electric can travel up to 415km.

Luckily, the so-so range isn’t enough to detract from the I-Pace’s excellent driving characteristics. Like all EVs, the dual-motor electric drivetrain is silky smooth and silent in operation. The only sound is an artificial propulsion noise heard in Dynamic mode. Similar to the speaker-generated sound of a BMW i8, it is meant to add a bit of aural excitement when pressing on. Far more exciting than the fake engine note, however, is the instant surge of torque available at a moment’s notice. With 394 horsepower and 512 lb-ft of torque delivered through all four wheels, the I-Pace can hit 100km/h in as little as 4.8 seconds, and it certainly feels every bit that quick. 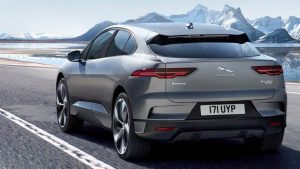 Thanks to a skateboard-like battery pack keeping that massive curb weight low to the ground, the I-Pace can be thrown into corners with incredible confidence and body control. It’s no sports car, but if feels so flat and planted that the differences are admittedly blurred a bit. On top of its finely-tuned chassis dynamics, the I-Pace offers a smooth ride ideally suited to leisurely drives. Rear visibility is heavily compromised by the sporty bodywork, but its small footprint still makes it easy enough to navigate city streets. An available air suspension offers three ride heights, including a low access height and a high off-road height designed to work with the Adaptive Surface Response mode over challenging surfaces. I seriously doubt anyone would do any kind of off-roading in their electric crossover, but, apparently, it is capable, sort of.

With a starting MSRP of $89,800 and climbing up to $99,800 in HSE trim before options, the I-Pace stands out as an interesting alternative to the established luxury crossovers on the market. The driving range could be better, the charging time could be shorter, and, in the interest of full disclosure, my test car did experience a few typical Jaguar quirks such as laggy or freezing touchscreens and finicky retractable door handles which may or may not have had something to do with the freezing temperatures. In any case, the I-Pace is a highly accomplished and attractive crossover that pulls off the EV thing quite well. If this is the benchmark that other luxury carmakers have to beat for their attempts at electric vehicles, consider it set pretty high.