The Hyundai Kona has quickly established itself as one of the most appealing choices in the subcompact crossover segment. Its combination of eye-catching design, choice of drivetrains, and featured-packed trim levels at an attractive price point make it a true standout. The Kona Electric builds on the success of the gasoline-powered version by offering consumers a full battery-powered alternative that’s equally appealing, if not more appealing, in its own right.

The Kona Electric can be easily spotted thanks to its distinctive front fascia eliminating the open grill of the gasoline model, which instead creates the illusion of a grill. It remains a highly distinctive-looking crossover and perhaps a tad cleaner looking than the gasoline models thanks to the lack of colour-contrasting cladding. Size-wise, the electric version is nearly identical to the gasoline models with similar cargo and passenger space. Overall spaciousness is a little on the tight side, but, then again, this is a subcompact crossover. 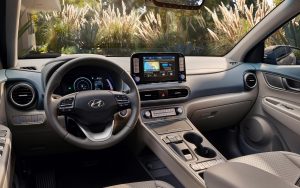 The interior is a well-designed space with good fit and finish, straightforward controls, and an easy to use infotainment system. Hyundai’s excellent touchscreen interface remains with the addition of several EV-related features such as the ability to pre-heat the cabin while charging on cold days and set charge times for lower-priced off-peak hours.  A somewhat finicky push-button gear selector replaces the traditional lever in the gasoline models. Other than that, however, this remains a very approachable and comfortable space to spend time.

The gasoline-powered Kona offers one of the finest driving experiences in its segment. The Electric model amplifies this experience further with typical EV characteristics such as dead-silent operation, a buttery-smooth drivetrain, and improved handling. The floor-mounted battery pack generates a low centre of gravity which allows the Kona Electric to dart around corners with excellent stability and body control. An available Sport mode adds some heft to the steering and sharpens up the motor response for a sportier feel. Like the drive modes, the regenerative braking offers different settings depending on the desired level of intensity. Full regen takes a bit of getting used to, but it reduces the need for regular braking and helps recharge the battery while driving.

The Kona Electric boasts an estimated range of up to 415km under ideal conditions. With cool temperatures during my week-long test, my tester displayed an indicated range of about 370km, which is still quite impressive and similar to that of rivals such as the Chevrolet Bolt, Kia Soul Electric, Kia Niro Electric, and even the entry-level Tesla Model 3.  Under the hood sits an electric motor which produces 201 horsepower and 290 lb-ft of torque, enough to make this the quickest variant in the Kona range. The acceleration is so swift that it is easy to overwhelm the front wheels and generate wheel spin even while on the move. All-wheel drive would certain help to manage all that power, but unfortunately, it is not available. 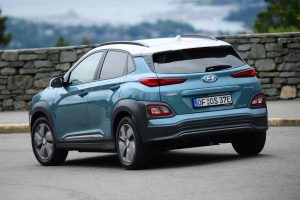 The lack of all-wheel drive isn’t the only shortcoming. As enjoyable as it is to drive even for long distances, there’s no question that the lack of adequate charging infrastructure, especially the more convenient level 3 fast chargers, is a major obstacle for day-to-day use. The useful range helps to alleviate that problem to some extent, but it remains an issue for those who lack charging stations in their location. The other major concern is pricing. The Kona Electric starts at $45,599 for the Preferred trim and stretches to $51,999 for the fully-equipped Ultimate model. That represents roughly a $20,000 premium over the equivalent gasoline version. The Electric model is certainly good enough to justify a price premium, but not a five-figure one.

There’s no question that the Kona Electric is the finest variant in the Kona family. It offers a pleasurable driving experience, loads of power, excellent driving range, and eco-friendly motoring in a package that’s just as practical and feature-packed as the gasoline equivalent. Being an electric vehicle means that the maintenance and operating costs will likely be a fraction of the gasoline model as well. It’s just frustrating that such an appealing package remains constricted by charging infrastructure challenges while also commanding such as sizable initial price premium. Those who have access to electric vehicle incentives or feel passionate about going green may be able to rationalize it. For most others, however, it won’t be so easy. The Kona Electric manages to pull off the Tesla thing quite well. If only it were able to do so at more of a Hyundai-like price point.