Despite the popularity of SUVs on the market, finding one that can properly handle the off-road without the discomfort of body-on-frame, truck-based, underpinnings is a rather tricky thing. Most crossovers are designed for everyday use on the road while also being prepared for the occasional rough weather conditions. The Honda Passport goes one step further. It is designed to fulfill the role of a mild off-road companion while also delivering the practicality that crossover buyers expect. It occupies a somewhat tight space between the smaller CR-V and the larger three-row Pilot on which it is based, but it’s a space it fills quite well.

At first glance, it would appear that Honda’s design team basically phoned it in with this one. The Passport looks just about identical to the long-running Pilot but with a shorter rear overhang for a more compact look. Although very similar in appearance, there is a distinction between Honda’s two largest crossovers. The Pilot is the one you buy when you need major utility and seven seats, but just can’t picture yourself in a minivan. The Passport, on the other hand, is one you buy when a bit of the adventure lifestyle can still take priority over family duty. It’s not a full-on off-roader in the mold of the Jeep Wrangler or even the Toyota 4Runner, but for a crossover, it is a fine compromise. 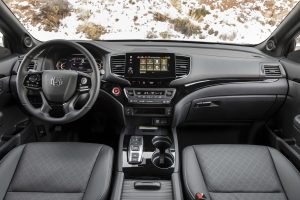 The interior is basically a carbon copy of what is found in the Pilot, only with the third-row bench removed. The result is an enormous amount space for both rear seat passengers and cargo in the back. The rear bench can also slide, recline, and of course split-fold for maximum utility. Up front sits a touchscreen which oddly lacks the shortcut buttons along the side found on other Honda models. Though users must resort to the screen for everything but volume control, the interface itself is graphically pleasing and responsive to inputs. Apple Carplay and Android Auto are available as well. The climate controls below the screen are straightforward to use and rear seat passengers get separate controls as well. The cabin is also filled with plenty of useful storage places, including a large bin between the front seats and compartments below the cargo floor.

The driving position is situated high up for a commanding view of the road with great outward visibility thanks to tall glass all around. The Passport drives more or less like a Pilot, which is to say fairly comfortable and refined. The ride can feel a tad stiff at times, which may be partly attributed to the large 20 inch wheels with relatively low profile tires. The ground clearance, however, is excellent, and there’s little doubt that the Passport will have no problem tackling tricky terrain. The all-wheel drive system uses torque-vectoring to send power to the right wheels for better traction over slippery surfaces. There are even snow, sand, and mud modes which customize the drivetrain for different weather and terrain. Though no deterrent to crossover shoppers, it still lacks a true low-range transfer case and locking differentials for full-on off-road exploration like you’d find on a proper truck-based 4x4.

The powertrain consists of Honda’s 3.5L V6 engine matched to a 9-speed automatic transmission. The naturally-aspirated engine produces 280 horsepower and 260 lb-ft of torque, which feels like a perfectly adequate amount of power. It also allows for a towing capacity of up to 2,268 kg when equipped with the appropriate dealer accessories. In terms of fuel economy, I managed to average about 13.5L/100km in the city and up to 10.0L/100km on the highway. I expected a bit better given the use of fuel-saving technology such as the 9-speed transmission and a somewhat irritating engine start-stop system (which can fortunately be disabled), but the figures are still perfectly acceptable for a midsized crossover such as this. 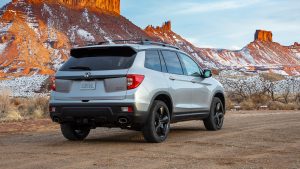 What may surprise some with the Passport is that the price tag isn’t exactly proportionally smaller with its size when compared to its big brother. The starting MSRP of $41,990 is actually higher than that of the Pilot, which begins at $41,290. To be fair to the Passport, however, you do get additional equipment such as a leather-wrapped heated steering wheel, 10-way power-adjustable driver’s seat, sunroof, and Honda LaneWatch blind spot display.  In any case, it probably makes sense to move up to the $45,590 EX-L, or the $48,990 top of the range Touring which actually undercuts the Pilot Touring by a significant margin.

Overall, the Passport fulfills its mission as the middle ground of the Honda crossover lineup. Though a bit pricey when compared to the equivalent Hyundai Santa Fe or Nissan Murano, the Passport does offer significantly more space and capability than either alternative. With Honda’s historically strong reputation for reliability and high resale value, it also makes a stronger case over the similarly-sized Ford Edge and Chevrolet Blazer, both of which can get just as expensive in top trim. You can certainly get more crossover for your money with the Pilot. For some, however, the Passport is all that’s really needed, and indeed, all that may be desired.