It’s no secret that Honda has struggled to penetrate the market with its hybrid offerings in the same way as other brands such as Toyota. Despite a few duds here and there, the brand has pushed forward continuing to develop the technology to the point where they now produce some pretty impressive models worthy of attention.  Rounding out the smaller, more affordable, end of the hybrid lineup is the Insight, a four-door sedan positioned neatly between the Civic and Accord in the Honda lineup.

For those who even remember, the original Insight was a funky little two-seater famous for being the very first hybrid vehicle to be sold in North America. It was later followed by a rather frumpy, dreary, second generation model that tried to go more mainstream, but fell well short of the competition in every way. Hoping third time is a charm, the latest model shares much of its DNA with the highly popular Civic. The two share the same platform with nearly identical dimensions, suspension components, interior and exterior designs. It is actually quite surprising that Honda didn’t just call it the Civic Hybrid. 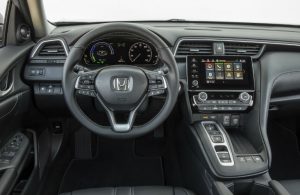 Overall, the Insight does have a slightly more mature, upscale look that’s inoffensive and conventional to the point where you wouldn’t guess that it is a hybrid. The interior is well laid out with nice materials, well-organized controls, and a smooth-operating infotainment system. Honda’s latest interface uses a clear menu structure with nice graphics and is compatible with both Android Auto and Apple Carplay. The push-button gear selector take some getting used to, but the rest of the controls are fairly straightforward and easy to use. Interior and trunk space is equivalent to that of the Civic with the same spacious layout. With the hybrid battery pack positioned under the rear seats, the Insight even retains the Civic’s folding rear seatbacks for maximum flexibility.

The Insight uses the same advanced hybrid system from the larger Accord Hybrid, only here it comes matched to a smaller 1.5L 4-cylinder engine for a total system output of 151 horsepower and 197 lb-ft of torque. One of the most fascinating aspects of this system is that it completely eliminates a traditional transmission. The engine can directly power the wheels in combination with the electric motor at high speeds. Most of the time though, it serves as a generator for the battery pack which powers the electric motor driving the front wheels. 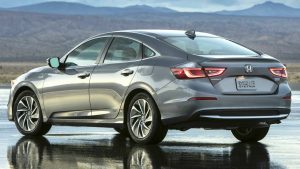 The result is a rather normal driving experience that feels very Civic-like. The suspension is compliant enough for a smooth ride, but still taut enough for controlled, spirited cornering. The hybrid system has an EV mode for short bursts of electric-only driving, but for the most part, the Insight drives like a normal hybrid with the system smoothly cycling between electric and gas-powered operation. Power is acceptable, though a Sport mode does make it feel a tad livelier. Of more importance though is the fuel economy. Over a week of both city and highway driving, I managed to average 6.0L/100km, but a Prius-rivaling 5.0L/100km is possible with a careful right foot.

The Insight is available in two trim levels. The base model goes for $27,990, and includes features such as a 7 inch display audio system with HondaLink, heated front seats, proximity key entry with push button start, and Honda’s full list of active safety technology including the LaneWatch blind spot display. Strangely, the only colour options for the base model are white or black, which is quite disappointing. The Touring model goes for $31,590 and adds features such as power-adjustable leather seats, heated rear seats, sunroof, premium sound system, Sirius XM and HD radio, AT&T Wifi hotspot, and a navigation system. Honda also doubles the colour options to include red and blue, which is a slight improvement. 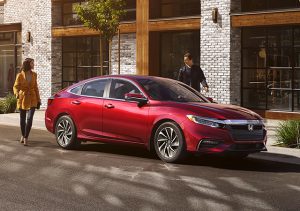 If the Insight sounds like a hybrid-powered Civic, that’s because that’s basically what it is. Honda could have just as easily named this the Civic Hybrid and added some continuity with the Accord lineup. Even though it shares a name with its weird predecessor, the Insight is about as normal as they come. The Toyota Prius has long dominated this segment, but the latest model’s styling is polarizing and a turnoff to some. Buyers will have to decide whether the nearly $4,000 price premium over the Civic is worth the slight styling differences and fuel economy benefit. But for those looking for an affordable hybrid with a mature, conventional look and feel, the Insight should do the trick.