When shopping for premium sport sedan, the go-to choice for most has traditionally been something from Mercedes, Audi, and BMW. Every competing brand from Lexus to Infiniti, and more recently Jaguar and Alfa Romeo, has tried to emulate their success in the segment. Try as they may, the German triple threat have a stronghold that’s difficult to breach. Apparently, the relative newcomer Genesis sees something that its established competitors don’t, because they’ve decided to have a go at it with a compact sport sedan of their own. Enter the Genesis G70.

The G70 sits on the larger end of the segment when compared to rivals such as the BMW 3-Series and Lexus IS. The design itself is quite sleek and handsome, though quite safe-looking and perhaps a little derivative of its immediate competitors. Sit one next to an Infiniti Q50, for example, and the similarities become glaringly obvious. Genesis is ambitious enough to take on the heavyweights, yet, oddly enough, they are not prepared to take any risks or push any boundaries in terms of their design. 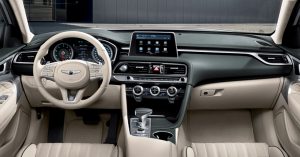 The conservative approach may bode well for it as it has for others in this segment. In any case, what’s certain to impress is the well-crafted interior. The materials are all convincingly upscale with superb fit and finish. The available Nappa leather seats are finished with contrast piping and a sharp-looking quilted pattern that carries over to the door panels. Best of all, despite the high level of tech, the controls for the touchscreen and instrument panel are logically arranged and easy to operate. The G70’s rivals could certainly learn a thing or two in this area. The only significant drawback to the cabin is the tight rear seat space, which is a little odd for a car that’s dimensionally larger than its rivals.

Like its impressive platform cousin, the Kia Stinger, the G70 benefits from the engineering expertise of former BMW M guru Albert Biermann. A shorter wheelbase and significantly lower curb weight, however, mean that the results here are even more dramatic than that of the Stinger. Left in Comfort mode, the G70 rides with the grace and delicacy of a refined luxury car. Turn the dial into Sport mode, however, and that Nurburgring-inspired DNA really begins to shine through. The controls sharpen up and the side bolsters of the seats inflate to prepare you for a bit of cornering fun. It may be a stretch to put the G70 on the same level as class leaders such as the Jaguar XE and Alfa Romeo Giulia in terms of handling, but it certainly isn’t far off.

Most G70 trims come equipped with a 2.0L turbocharged 4-cylinder engine producing 252 horsepower and 260 lb-ft of torque, which is par for the segment. My tester, however, came with the optional 3.3L twin-turbo V6 which pumps out an impressive 365 horsepower and 376 lb-ft of torque. While not exactly the most exciting sounding engine, there’s no question that the pulling power is impressive. Still, I’m not sure that it’s worth the increase in weight and fuel consumption when compared to the 2.0L. Over a week of mostly city driving, I only managed to average 14.5L/100km, which is a pretty painful trade-off for a just a bit off added straight-line shove. 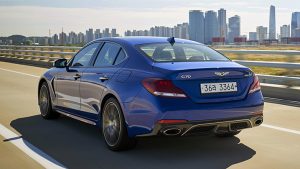 Both engines come hooked to a standard all-wheel drive system along with an 8-speed automatic transmission. Paddle shifters are available, but without a dedicated manual mode, the transmission eventually resorts to doing its only thing after a while, where it does a reasonably good job of selecting the right gear at the right time.  If shifting gears yourself is really your thing, the 2.0T is offered in a Sport model with rear-wheel drive and a 6-speed manual gearbox for the select few who wouldn’t have it any other way.

Regardless of which model you go with, the G70 offers a huge amount of value packing in loads of features at a reasonable price point. Prices range from $42,000 for the 2.0T Advanced all the way up to $57,500 for a 3.3T Sport. At $47,000 the 2.0T Elite likely represents the sweet spot in the range for most with a list of features that includes heated and ventilated leather seats, 15 speaker Lexicon sound system, 8 inch touchscreen with navigation, and full LED headlights. Like the higher-priced Genesis models, the G70 includes a 5 year or 100,000km comprehensive warranty along with free map updates, roadside assistance, and maintenance with valet pick up and drop off for the full duration of the warranty.

Forging a brand in the image of the big German makes is a high-pressure task to say the least. Just ask Cadillac how their attempt went. Genesis, however, has built a solid foundation with the incredibly well-crafted G90, G80, and now G70 sedans, and won big with customer service and build quality surveys. The long comprehensive warranty and valet service are highly attractive, and the brand itself is highly desirable, if not especially well-known. As long as they maintain their steady momentum as a fringe brand and not get in over their heads, they should have no problem attracting buyers to their base. As the entry-point into the Genesis brand, the G70 represents an excellent introduction.