There are many excellent high performance sports cars on the market today to choose from. The problem, however, is that many of them are priced out of reach for the average consumer. This is one of the many reasons why I’ve taken a liking to the Ford Mustang. It’s an aspirational sports car within reach of most, and that’s part of what has helped make the most popular sports car of all time with over ten million units sold. More remarkable than its popularity, however, is how the Mustang has evolved to the point where it has made ridiculous levels of power and performance accessible to almost anyone. The average person can walk into a Ford dealership and get their hands on some serious speed for not a lot of dough.

For a starting MSRP of $30,599, Ford will sell you a 310 horsepower Mustang Fastback complete with a turbocharged 4-cylinder Ecoboost engine, or $35,599 if you want a convertible. Though somewhat lifeless, the Ecoboost versions do the trick for those who just want to cruise around in style. Those who really want to feel their heart racing and get the full Mustang experience, however, will need to shell out at least $40,189 for the GT. For just about average family car money, you get a 5.0L naturally-aspirated V8 engine producing 460 horsepower and 420 lb-ft torque, which is enough to propel this coupe to 100km/h in just over 4 seconds. What was once considered Ferrari performance can now be can be had in an everyday Mustang, and that’s pretty incredible. 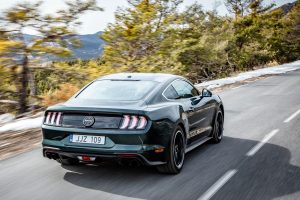 The Mustang Bullitt model tested here turns up the heat with an additional 20 horsepower, unique styling details inspired by the movie car from the Steve McQueen flick on which it is based, and many additional performance goodies from the GT models optional Performance Packages, all for $57,525. That’s a significant sum of money for a Mustang, but the Bullitt mostly justifies it with its comprehensive list of standard equipment which makes it comparable to that of a fully-equipped Mustang GT. Plus, you get that slick debadged look and the option of that beautiful Dark Highland Green paint that just looks so right on this car.

Along with that insane straight-line speed, the whole driving experience is rather impressive. A slick-shifting 6-speed manual is the only gearbox offered, and comes with an effective rev-match feature for smooth downshifts. The active-valve performance exhaust offers four modes, each getting progressively louder and more satisfying than the last as you open the taps. Managing all that power is not a problem thanks to grippy Michelin Pilot Sport summer tires on 19 inch wheels, along with large Brembo brakes for sharp, immediate stopping power. The ride and handling is properly sorted as well with standard MagneRide adaptive dampers offering a great balance between comfort and cornering balance.

Even with all of the performance on offer, the Mustang remains a friendly daily driver. Unlike the Chevrolet Camaro which feels downright claustrophobic with its tiny windows and poor outward visibility, the Mustang offers a comparatively expansive view with decent sightlines all around. And unlike the Dodge Challenger which feels enormous and cumbersome to drive on city streets, the Mustang feels lithe and manageable much like a smaller sports car. Between the three American muscle cars, it’s hard to argue with the Mustang’s all-around effectiveness as an everyday vehicle. 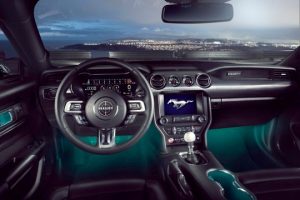 Aside from a few Bullitt badges here and there, the Bullitt model differs little from other Mustangs from the cabin Back seat space is predictably limited and the optional Recaro seats are a bit too aggressively bolstered for my liking, but the rest of the interior has been well thought out. The gauge cluster uses a customizable 12 inch display which offers a cool, unique look for each drive mode. Other nice features include a great sounding 12-speaker B&O sound system and Ford’s well-designed Sync 3 infotainment system, which includes a WIFI hotspot and both Android Auto and Apple Carplay compatibility.

Whether or not you are a fan of the movie matters not because, whichever way you look at it, the Mustang Bullitt is just a proper all-around performance car. Even if you strip things back a bit and just go with a regular GT model with a few strategically chosen packages, you’ll be getting one of the best performance car bargains on the market and a thrilling driving experience. How much more attainable can high performance get? Only time will tell.