Despite the promise of fancy new electrified and autonomous vehicles to come in the future, it was Ford’s decision to drop all sedan and hatchback models from the North American market that proved to be the company’s headlining moment in recent times. With a future that is dependent on the success of trucks and crossover SUVs, models such as the Edge are now more important to the success of the brand than ever before. Now in its third generation, Ford has given their popular crossover an update for 2019. It remains a midsized five-seater, positioned between the smaller, less expensive, Escape, and the larger, 7-passenger, Explorer. The updates include revised drivetrains, styling tweaks, additional features, and the adoption of a high performance variant, the Edge ST.

The visual updates to the more popular models, such as my Titanium test car, are relatively modest, but enough to keep the Edge fresh and up to date with the rest of the Ford lineup. The interior is more utilitarian than upscale, but fit and finish is excellent, and storage spaces are plentiful. Ford’s Sync 3 infotainment system is responsive with a clear menu structure, and is compatible with both Apple Carplay and Android Auto. The controls positioned below the screen are somewhat illogically arranged, but at least they are easy to use. Front seat comfort is excellent, however, rear seat space seems a bit lacking given the size of the vehicle. Thankfully, the cargo space is plentiful. 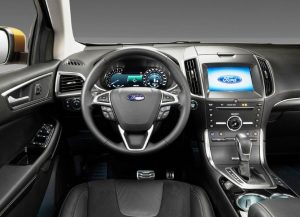 As far as mainstream crossovers go, few are as comfortable to spend time in as the Edge. The soft supportive seats combine with the compliant suspension to create a relaxing, comfortable driving experience perfect for long distance commutes. In typical crossover fashion, the driving position offers a commanding view of the road with respectable sightlines all around. An available self-parking system assists with tricky parking maneuvers, and a comprehensive list of active safety features called Ford Co-Pilot 360 are available as well. The most impressive of these driver assists is the lane centering which automatically turns the steering wheel through corners as part of the adaptive cruise control.

Most Edge models come equipped with a 2.0L turbocharged Ecoboost engine matched to an 8-speed automatic transmission. All models except the base also come equipped with all-wheel drive. The Ecoboost engine is both quiet in operation and adequately powerful with 250 horsepower and 280 lb-ft of torque on tap. With the help of an impressively refined engine start stop system, my fuel economy for the week came to 12.0L/100km in mixed city and highway driving conditions with 9.0L/100km possible on longer highway runs. Those looking for some serious performance from their Edge will want to step up to the ST, which swaps the 4-cylinder engine for a 2.7L twin-turbo V6 that produces 335 horsepower and 380 lb-ft of torque.

Pricing for the Edge starts at $34,349 for the SE model and goes up to $47,449 for the ST before options. The Titanium model tested here starts at $41,749 and includes features such as leather-trimmed seats, hands-free power tailgate, a wireless charging pad for smartphones, and an excellent sounding B&O premium audio system. Options that include an extra-large panoramic Vista moonroof, heated and ventilated seats, and the enhanced active safety features pushed my tester’s price tag close to 50 grand. That’s well into Acura RDX and Infiniti QX50 territory and perhaps a bit ambitious for mainstream player like the Edge.

With its combination of comfort, practicality and extensive features, the Edge is a well-rounded crossover with little to complain about, but also little to get excited about. It also competes in a crowded segment with plenty of excellent offerings, including the Nissan Murano and Honda Passport. Unless the right purchase incentives are in place, I’d question the decision to pay more for the Edge. In fact, if I were shopping within the Ford family for a practical family mover, I’d skip right over it in favour of the far cooler-looking Flex. Compared to the Edge, the Flex offers more space and seating capacity for a similar price. Even better though, it has far more exciting styling, especially in one of the two-tone combinations which make it look like a baby-Range Rover Sport. Judging by the sales numbers, the buying public isn’t with me on this, but hey, I guess crossover buyers just aren’t going for cool and interesting.