With crossovers gaining popularity over traditional cars, Ford’s SUV and truck-only strategy seems to be proof of the brand’s eagerness to cash in on the latest market trends. Serving as the entry-point of the Ford lineup in place of the Focus and Fiesta is the EcoSport. Though largely unfamiliar to North Americans, the India-built subcompact crossover has been available overseas for many years where it was originally designed for emerging markets. Although it fills its intended role well enough, it doesn’t take long to realize that the EcoSport is more of a rushed effort to fill a niche rather than a full-baked contender.

Thanks to its Fiesta-based underpinnings, the EcoSport is the smallest crossover on the market by a good margin. The combination of a super-short wheelbase, narrow body, and a tall SUV profile inevitably result in oddball proportions. As a result of being nearly as tall as it is long, it looks a bit like a jacked-up, rolling jellybean. Taking the looks from odd to just plain comical, my tester came with an optional Black Appearance Package which adds a matte black hood decal as if this were some kind of flashy, tire-shredding, muscle car. I suppose that’s Ford’s way of convincing us that the EcoSport actually has some form of sport going on. From a functional standpoint, the most questionable design detail is arguably the side-swinging rear door which makes loading cargo a pain from one side while simultaneously leaving you wet in the rain. 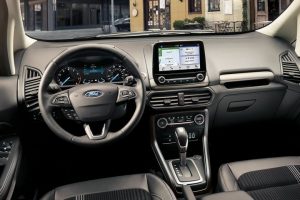 Things get a bit better on the inside with an instrument panel that includes Ford’s excellent Sync3 infotainment system. The interface for the 8 inch touchscreen is clear, well-designed, and gets Apple Carplay, Android Auto, and even Waze for navigation duties. The rest of the controls are equally straightforward and easy to use, and the driver’s seat is positioned high up for a nice commanding view of the road. The use of materials and finishes are generally acceptable with a few obvious signs of cheapness here and there, but that’s far from the biggest issue. The unfortunate consequence of the EcoSport’s mini-ute proportions is serious lack of passenger and cargo space. The rear seats are especially cramped and the cargo area is smaller than that of many hatchbacks. Those looking for actual utility in the EcoSport’s sport utility vehicle designation will likely come away disappointed.

The EcoSport comes with a choice of two drivetrains. Front-wheel drive models get a turbocharged 1.0L 3-cylinder engine, producing 123 horsepower and 125 lb-ft of torque, matched to a 6-speed automatic transmission. Moving up to all-wheel drive upgrades the engine to a 2.0L 4-cylinder producing a healthier 166 horsepower and 149 lb-ft of torque. The EcoSport can certainly use every pony it can get, because, even with this upper-trim powertrain, the performance is anything but sporty. Acceleration feels sluggish especially at highway speeds where there is barely enough power to manage a simple passing maneuver. Modest power levels would be acceptable in a small vehicle such as this if, on the flip side, it were highly fuel efficient. Unfortunately, the best I could squeeze out of it was 10.5L/100km around town and about 8.5L/100km on the highway, which is worse than many larger, peppier rivals.

Although it is ironically in short supply of both eco and sport, the EcoSport is still quite a pleasant city runabout. Its tiny dimensions make it a total breeze to maneuver and park around tight city streets more so than just about any other crossover on the market. Its short wheelbase also helps give it a tight turning circle and a rather nimble feel through corners. The downside to this is a somewhat bouncy ride over broken pavement, though it is still acceptably smooth otherwise. The bigger issue with its unique dimensions, however, is susceptibility to crosswinds while travelling at freeway speeds, which can give it a tippy feel on a windy day. 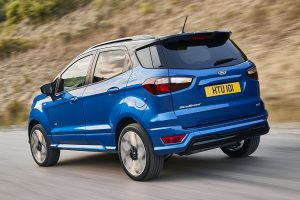 The EcoSport’s MSRP ranges from $21,849 in base S trim up to $30,349 for the top-spec Titanium trim before extras. Those who want the all-wheel drive 2.0L engine combo will have to splurge for the SES trim, which goes for $28,849. Features on the SES include blind-spot monitoring with cross-traffic alert, heated front seats, heated steering wheel, a sunroof, navigation, 4G LTE Wifi Hotpot, and a cloth-vinyl combination seat material called “ActiveX.” Even so, it is still pricier than comparably-equipped key rivals such as the Hyundai Kona and Nissan Kicks. Moreover, active safety features such as automatic emergency braking, lane departure warning, and adaptive cruise control are not even available as options, which is just unacceptable for a new vehicle in this day and age.

It may sound like I’m having a serious downer on this car, which may not be entirely fair. To its credit, the EcoSport offers many desirable features and may be an attractive option for those who want an all-wheel drive crossover in the smallest, most city-friendly package available. For just about anyone else, however, it’s easily outmatched by rivals like the Nissan Kicks, Hyundai Kona, Subaru Crosstrek, and Honda HR-V. All offer more practicality, performance, safety features, better fuel economy, more agreeable styling, and some even manage to do so at a much lower price point. If the EcoSport represents Ford’s attempt at going all-in on trucks and SUVs, they better take a second look at that hand, because this is a measly two-pair at best.