The BMW X range is filled with variety from the entry-level, compact-sized X1 to the lavishly-trimmed, three-row X7. It was the middle of the pack X5, however, that started BMW’s venture into the lucrative world of crossovers way back when the model was launched in 1999. Since then, the X5 has grown into one of the brand’s largest offerings and continues to be a go-to choice for affluent families on the hunt for a practical, do-it-all, top-tier luxury crossover. The latest variant ups the game in terms of technology, capability, and refinement, making it the most accomplished X5 to date.

Despite maintaining a similar appearance and proportions to that of the previous generations, the latest X5 has grown in length, width, and wheelbase, becoming the largest version yet. The increase in overall size translates into a generous amount of interior space for tall adults to sit comfortably. The absence of third row seating (that feature is now left to the full-sized X7) means that the cargo area is very spacious as well. The interior is also quite lavishly finished with details that include a nappa leather wrapped dashboard, knurled aluminum dials, and even a crystal gear selector. Other than the gloss black button panel on the centre console which will likely be prone to finger prints and scratches, the X5 is remarkably well appointed and about as luxurious as a flagship 7-Series sedan. 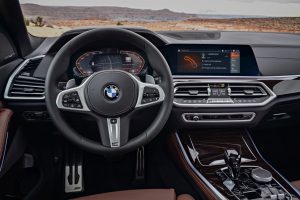 In addition to offering a luxurious seating space, the X5 comes loaded with an impressive, but also a slightly overwhelming, amount of technology. BMW’s latest version of the iDrive infotainment system is present here with fine graphics and a menu structure that’s as clear and visually appealing as ever. The gauge cluster too consists of a high-graphic display and can be complimented by an effective head-up display that projects information onto the windshield. Luxurious options mostly borrowed from the top of the range 7-Series include soft-close doors, massaging front seats, a night vision system with pedestrian detection, an ambient fragrant air system, and a highly effective 3D surround-view camera system. Naturally, the latest semi-autonomous active safety technology is available as well.

The X5’s list of technology designed to enhance on and off-road performance is just as extensive. The standard adaptive suspension system can be further complicated with an available two-axle air suspension and an off-road package designed to improve the X5’s capability and level of comfort on challenging surfaces. Naturally, this includes the ability to automatically adjust the ride height and suspension firmness of the vehicle at the push of a button. BMW’s are far better known for their handling performance than their off-road ability, and to that end, the X5 can be optioned with an Active Roll Stabilization and Rear Steering system designed to reduce body motions and tighten the turning radius.

In all honesty, it is difficult to say how effective this vast array of technology is at improving the X5’s performance driving on regular roads where the majority of the time is spent. In this environment, what’s abundantly clear is that the X5 displays excellent road manners with a compliant suspension and an overwhelming feeling of confidence and stability. A certain amount of body movement is still present even with everything stiffened up in Sport mode, but that’s to be expected from a large, heavy, off-road capable vehicle such as this. Realistically, the likelihood of one of these blasting around a winding road for thrills is about as low as finding one tackling the Rubicon trail. 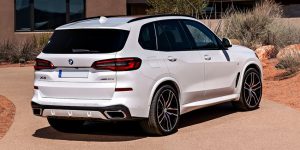 The X5 is available in a few different drivetrain configurations which include the standard xDrive M40i equipped with a turbocharged 3.0L inline-6 cylinder engine producing 340 horsepower and 332 lb-ft of torque, as well as the xDrive M50i packing a turbocharged 4.4L V8 with 456 horsepower and 479 lb-ft of torque. A plug-in hybrid model is available as well. Unless you intend to do plenty of regular towing, the V8 is really overkill for day-to-day driving. The immediate power delivery and rich tone of the M Performance exhaust are nice, but the 3.0L engine should be more than capable enough of moving this crossover with a good sense of urgency. It should also help improve on the M50i’s dismal fuel economy of 17.0L/100km in mixed city and highway driving conditions.

With a starting MSRP of $71,500 for the xDrive M40i or $86,000 for the xDrive M50i, the X5 is well positioned against top-tier rivals such as the Mercedes GLE, Porsche Cayenne and Land Rover Range Rover Sport. In fact, it undercuts most of its main rivals while nearly matching them in terms of performance and capability. As far as technology and outright luxury is concerned, however, the X5 is at the top of the heap. Admittedly, a Lexus RX 350 will accomplish much of the same while also costing far less to own over the long-haul. For those willing to shell out a bit extra for that extra bit of luxury, performance, and capability, the X5 is one of the most well-rounded offerings in its segment.