The BMW 3-Series has managed to build a long-standing reputation as one of the best driver’s cars in the entry-level luxury sedan segment. It’s no secret, however, that the brand has shifted its focus away from driver engagement to more profitable ventures such as electrified vehicles and endless crossover variants. The result is that the charm of the 3-Series has largely faded. Despite offering enthusiast-minded options like rear-wheel drive and a manual gearbox, the previous generation F30 model was never really exalted like the generations that came before it.

BMW aims to change that. The latest 3-Series may only be an xDrive all-wheel drive, automatic transmission affair like every other competitor, but it makes a strong effort to make up for it by rekindling a bit of the old 3-Series magic.

The G20-generation 3-Series is larger in every dimension than the F30 model it replaces. It is now about the size of an E39 5-Series from two decades earlier, which sounds mildly absurd, but quite impressive when you consider that it is also lighter and quite a bit stiffer as well. The design is quite handsome with quintessential BMW styling cues mixed with modern details. It looks especially sharp in M sport trim with the more aggressive aerodynamic package and wheel design. The rear end, however, is perhaps a tad too conservative and easily mistakable for a handful of other competing premium sedans. 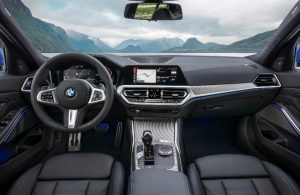 Despite the added size, the interior doesn’t feel particularly more spacious than models of the past, which is likely partly attributed to modern safety requirements. The overall look and use of materials is quite impressive with nice details such as knurled aluminum dials and an available leather-stitched dashboard. BMW’s latest iDrive infotainment system is graphically pleasing and well-designed despite the depth of features and level of complexity. A Siri-like intelligent personal assistant, however, called “Hey BMW” helps alleviate some of the complexity with simple voice commands. The gauge cluster includes a display as well with a navigation map flanked by traditional readouts which are not quite as easy to read or customize as they probably could be. Some of the technology highlights include a large, information-packed, head-up display, a reverse automated parking aid, and an impressive surround-view 3D camera system.

The 3-Series has traditionally been about delivering a superlative driving experience, and the latest version has been comprehensively reengineered to deliver on that front. Regardless of the speed you’re carrying or the condition of the road you’re traveling on, the 330i always feels agile, composed, and well-sorted. The steering is appropriately weighted with good feedback and responsiveness in its Sport setting. Despite being all-wheel drive, it still feels very much rear-driven with great chassis balance and body control. Best of all, the impressive handling abilities are matched with equally impressive ride quality, solidity, and general refinement. That’s the magic of the 3-Series. It feels just as happy being thrown around corners as it does handling typical family car duties.

The M Sport Package is the best way to get the most of the 330i driving experience. Though a passively-damped Standard suspension or M Sport suspension comes standard, available adaptive dampers allow you to switch between comfort and sport modes with different levels of firmness. The steering, engine, and transmission also each have their own M Sport specific programs with different drive modes, and M Sport brakes are offered as well. My favourite setup quickly became Sport Individual with the engine and steering set to Sport and the transmission and suspension set to Comfort. This setup offered the best balance with sports car-like engine response and steering feel, yet luxury car ride quality and refinement. An efficiency-minded Eco Pro mode is offered, though it neuters the 330i’s sporty character to the point where it should be avoided for anything but hypermiling. 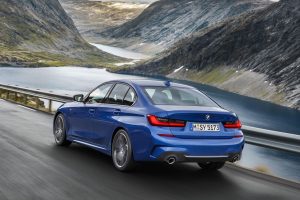 The balance between efficiency and performance is probably better realized by the turbocharged 2.0L 4-cylinder engine. With a healthy 255 horsepower and 295 lb-ft of torque, it always feels plenty powerful and, thanks to the outstanding 8-speed automatic transmission it’s paired with, delivers rather impressive fuel economy figures of up to 6.0L/100km in real world driving. The xDrive all-wheel drive system help make the most of the engine’s power while an optional M Sport electronic differential helps to enhance cornering performance similar to that of a full-on M3. Sadly, the one sporty option that isn’t available is a three-pedal manual gearbox.  Lack of demand finally means the end of the manual in the regular 3-Series, which is a shame given what an integral part it played in BMW’s “Ultimate Driving Machine” ethos. Fortunately, the option continues to live on in a few proper M cars.

At $49,000 to start, and just north of $60,000 when equipped with desirable option packages, the 330i is an expensive proposition relative to a comparable Lexus IS 300 or Genesis G70, models which will also be more affordable to run over the long-haul. BMW is fairly aggressive, however, when it comes to leasing, and in that regard, the 330i is an excellent option. With its reputation slipping away in lieu of some serious competition, the 3-Series had a lot of ground to cover to recapture its former sports sedan title. Despite the lack of rear-wheel drive or a manual gearbox, the 330i M Sport is dynamically gifted and enjoyable enough to signal that BMW is back on track.