Every brand seems to have a “thing” that they are known for. For Porsche, that would be high performance sports cars. For BMW, it would be legendary sport sedans. When asked what characterizes Volvo, most would probably say safe and durable boxy station wagons. Although wagons remain very much a part of the Volvo lineup, the real bread and butter profit markers today are the XC line of crossovers. Sitting neatly between the compact XC40 and the full-size 7-passenger XC90 is the brand’s most popular variant, the XC60.

Now built on Volvo’s Scalable Product Architecture Platform, the XC60 is stiffer, safer, larger, and yet, no heavier than the long-running first generation model. The design is clean and sophisticated, yet unmistakably Volvo. The Thor’s Hammer LED headlights add a bit of visual interest helping it stand out in a crowded crossover market. Another neat exterior feature are the cleverly-designed windshield wipers, which include perforated rubber along the length of the blade from which washer fluid sprays. It works remarkably well, although I wouldn’t want to know the cost of those blades come replacement time. 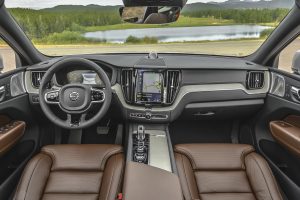 The interior, however, is the real highlight of the XC60. The design and materials used throughout are excellent with a very high level of perceived quality. Striking details include porous matt-finish wood trim and Orrefors crystal for the gear selector. Both the instrument cluster and centre stack make use of high-resolution LCD displays. The centre touchscreen is responsive to inputs and has a fairly well-organized menu structure, but it is a bit distracting to use on the move and a little tedious for less common tasks. The spacious cabin is filled with handy touches such as non-slip cavities under the rear seats designed to fit tablets and buttons in the cargo area to collapse the rear seats and lower the vehicle for easier cargo loading.

The XC60 steers and handles reasonably well for a crossover, but that’s really not the focus. The job here is to make driving comfortable and effortless, and it accomplishes that beautifully. Things are made even more effortless at highway speeds where Volvo’s available semi-autonomous Pilot Assist system comes into play. The system automatically makes adjustments to steering angle and speed to keep the vehicle where it needs to be but also requiring the driver to be fully alert and engaged. It works fine, but more impressive to me is the incredibly clear and crisp-looking 360 degree camera system which makes parking a breeze.

The entry level T5 model receives a 2.0L turbocharged engine powering all-four wheels through an 8-speed automatic transmission. The T6 model adds a supercharger to the turbo 2.0L which increases engine output from 250 horsepower up to a more than ample 316.  If a turbocharged and supercharged 4-cylinder engine doesn’t sound complicated enough, the plug-in hybrid T8 model tested here matches the twin-charged engine to a battery pack and an electric motor powering the rear axle for a total system output of 400 horsepower and 472 lb-ft of torque. 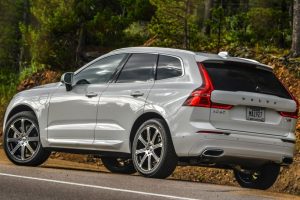 That’s an awful lot of power for a family-oriented, mid-sized crossover, and you can really feel it. Regardless of whether you drive it in normal Hybrid mode or the performance-oriented Power mode, the deep reserve of instant off the line torque or passing power is undeniable. Consumers interested in a hybrid, however, are more likely interested in the efficiency benefits, and it is here where the T8 is a bit of a letdown. With a light foot and a mixture of city and highway driving, I was only able to average 9.5L/100km driving in Hybrid mode. That’s only marginally better than what a T5 model could manage. An all-electric Pure mode is available when the vehicle has been charged through a 120V or 240V power source, but that’s only good for a barely useful 25 kilometres or so before the battery is depleted.

Even with the efficiency as it sits, there are some who may feel that the plug-in hybrid would fit their lifestyle, and they may be right. I’m willing to bet though that they will change their mind when they see the price premium. Where the T5 and T6 Momentum models start at a reasonable $46,350 and $52,700 respectively, the plug-in hybrid T8 Inscription begins at $71,850 and can go as high as $90,000 with options. Compared to an equivalently equipped T6 Inscription, the T8 commands a sizable $15,000 price premium and I just don’t see a sound financial case, especially for long-term ownership when that enormously complex twin-charged hybrid drivetrain requires repairs out of warranty.

For those looking for a hybrid-powered luxury crossover, the well-proven and reasonably priced Lexus NX300h seems to make the most sense. My pick of the XC60 range would be a nicely optioned T5 Momentum complete with the comparably simple 2.0L turbo engine which should provide sufficient performance and efficiency all for around $30,000 less than a heavily optioned T8 model. In that spec, the XC60 not only comes off as good all-around value, but also becomes one of the most desirable mid-sized crossovers in the luxury segment.