2018 Toyota Yaris - There are many who feel that a car should be more than just a transportation appliance. It should be a form of excitement and self-expression, a piece of art, or an object of desire. There are many others, however, who feel the complete opposite, and couldn’t care less about styling, fun factor, or status symbols. A reliable and affordable tool for getting from point A to point B will do just fine. To them may I present the Toyota Yaris.

To be fair to Toyota, the brand has done a commendable job of instilling a bit more excitement into their cars as of late. The Yaris, however, is a relic of a time when Toyota was content with just resting on its laurels and phoning it in. Driving enjoyment and eye-catching styling just aren’t really part of the formula. The front end design of the Yaris has a bit of European flair to it for some visual interest, but overall, there isn’t much here to get excited about. It’s just an honest, simple hatchback content with being just that and nothing more. 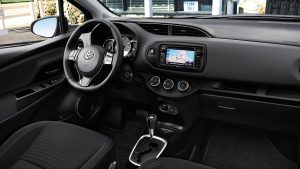 The interior controls are about as simple and straightforward as they get. Just about anyone can sit inside and figure everything out within a few minutes, which is something that can’t be said of most cars built today. The touchscreen is clear and easy to use. The climate controls are operated with a trio of simple dials. Starting the engine requires the turn of a key rather than the push of a button. The steering wheel tilts but doesn’t telescope, which makes the driving position awkward for some. Front seat space and comfort are quite good, however, the backseats are rather cramped. The cargo area though is a useful size.

Motivation comes courtesy of a 1.5L 4-cylinder engine producing 106 horsepower and 103 lb-ft of torque, matched to either a standard 5-speed manual or optional 4-speed automatic transmission. It is here where the Yaris really shows its age. It’s surprisingly spritely off the line thanks to sharp throttle tip-in, but beyond that the engine feels rather laboured getting up to speed when hurried. It’s especially buzzy at highway speeds, partly due to the outdated 4-speed automatic, which lacks enough gears to silence the engine’s protest at any form of haste. That being said, however, the drivetrain is suitable enough when driven in a leisurely manner. The fuel economy is decent as well. I averaged 8.5L/100km in mixed city and highway driving.

Leisure urban commutes are where the Yaris shines brightest. Tall glass and a low beltline allow for excellent outward visibility, making it easy to perform a quick lane change or parking maneuver. The handling and braking ability are nothing to brag about, but the small size and low curb weight make it feel quite nimble and agile when navigating corners and tight spots. The short wheelbase causes a bit of bounciness over rougher roads, but the ride quality is still acceptably smooth over all but rougher surfaces.

Prices start at $15,390 for a 3-door CE model which includes features such as heated seats, Bluetooth, and a backup camera. Most, however, will want the $16,700 LE model for its air conditioning, cruise control, keyless entry, and extra pair of doors. The SE model tops the range at $18,350, adding a few sporty frills along with a leather-wrapped steering wheel and shift knob. The 4-speed automatic transmission adds $1,000 to all trim levels. Impressively, all models come standard with Toyota’s “Safety Sense C” package, which includes automatic emergency braking with forward collision warning, lane departure warning, and automatic high beams. The Yaris is one of the most affordable vehicles on the market to include these active safety features as standard equipment.

The Yaris may be a little past its expiration date, but anyone who dismisses it for that reason alone needs to get a clue. Its consistency has made it one of the most familiar, easy to use, and dependable cars on the market. That ancient drivetrain is outclassed by rivals in terms of performance, but it’s also simple, thoroughly debugged, and damn near indestructible. The interior lacks a few modern conveniences, but it has the features that matter, including active safety features, at a price that undercuts its rivals. Its affordability, simplicity, and reliability also make it a highly attractive used car buy, which means that resale values are exceptionally high as well. The Yaris may not be exciting to drive or cool to look at, but when it comes to the fundamentals, A to B transportation just doesn’t get much more sensible than this.