The Toyota Prius has become the world’s best-selling hybrid, which is a reflection on how good it is, not just as a hybrid, but as a car in general. The Prius hits a lot of important must-haves, including practicality, reliability, and affordability, all wrapped together in a ridiculously fuel efficient package. There is, however, an alternative choice within the Toyota family. For those who do mostly short-distance city driving and live in a location with a developed charging infrastructure (or at least have the ability to charge at home), a plug-in hybrid vehicle might be the more compelling option. Luckily for some, the Prius lineup has that option covered with the Toyota Prius Prime.

One thing the Prius liftback observably lacks is agreeable styling, which has arguably been the one notable criticism of the current generation. Fortunately, that’s something that has been mostly rectified on the Prius Prime. The styling of the Prime is far less controversial than its liftback cousin. It gains sleek LED headlights borrowed from the Mirai hydrogen car, and a cleaner-looking rear end. It’s still no beauty queen, and the tiny 15 inch wheels look like M&M’s on a car of this size, but, for what it’s worth, it’s a dramatic improvement over the regular Prius Liftback. 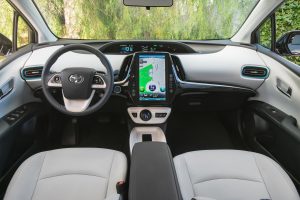 On the inside, the Prime differentiates itself from its showroom mate with an available 11.6 inch touchscreen that dominates the instrument panel, somewhat similar to what you’d find inside a Tesla. It’s relatively easy to use but not quite as sharp or responsive as many of the tablets it resembles.  As neat as it is, a touchscreen is just no match for proper buttons and knobs when it comes to distraction-free driving. For those who prefer simpler controls, the base model comes equipped with a smaller 7 inch screen and more traditional climate controls with actual buttons.

Being a plug-in hybrid, the Prime is able to travel up to 40 kilometres on electricity alone before resorting to hybrid mode. At that point, the gas engine will activate under high load conditions. The transition between gas and electric power is seamless, and most of the time I never noticed the gas engine operating. The electric mode can be replenished in 5.5 hours on a household 120-volt power outlet or just over two hours on 240 volts. Both times are significantly faster than competitors, but the electric range is far shorter as well. A Chevrolet Volt or Honda Clarity can achieve 70 kilometres of electric-only driving before switching to hybrid mode.

Under regular city and highway use, the Prime averaged around 5.0L/100km in hybrid mode, which is about on par with a regular Prius Liftback. With the ability to plug my test car into a standard wall outlet next to my driveway, and most of my daily drives lasting under 35 kilometres, I ended up using hardly any gasoline at all during my week with the Prime. Anyone with charging challenges or a longer commute, however, will indeed have to tap into the gas reserve. With only 40 kilometres of electric range, the Prime requires you to assess your driving habits and charging opportunities and determine how often they will realistically be used. 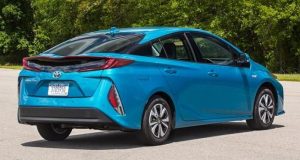 With prices ranging from $32,990 for a base model to $38,570 for the Upgrade model with Technology Package, the Prius Prime represents good value for the money, especially when you factor in provincial incentives for electric vehicles. In Ontario, at the time of writing, the Prime qualifies for a $7,095 incentive, which brings the price down slightly below that of the regular Prius Liftback and well below the Camry Hybrid.

The useful EV range and nicer styling of the Prime make the Liftback somewhat redundant in the model lineup in provinces where hefty incentives are available. The only reason I can think of to choose the Prius Liftback would be for the slightly larger trunk and fifth seatbelt in the rear bench. The Prius Prime is strictly a four-seater and inexplicably has an armrest with cup holders in place of a middle rear seat. If neither of those things are an issue and you happen to live in an EV-incentivized province, along with places to charge and a short commute, then it’s the obvious choice.