When it comes to electric vehicles, Nissan was uncharacteristically ahead of the game, launching the Leaf well before other affordable electric vehicles came to market. The attention-grabbing Tesla brand may be hogging the EV spotlight, but it is the Leaf that has quietly been slipping its way into driveways to become the world’s best-selling EV to date. The 2018 model introduces a new design with updated technology and a longer driving range of up to 240 kilometres.

Design-wise, the Leaf has more or less abandoned the edgy styling of the first generation model and gone with a more subdued, conservative look. There’s no mistaking it for a Nissan, but nothing about it really screams EV. The same could be said about the interior where, aside from the oddball gear selector, there’s very little to lift an eye. Everything is a bit on the economy side, but, for the most part, everything is functional, useable, and well finished. The cargo area is a useful size with folding seatbacks helping to expand the space further. Five occupants will fit in a pinch but four will sit far more comfortably. 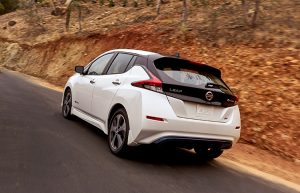 As far as the driving experience goes, the Leaf is best described as perfectly adequate. It can take a corner just fine, and the power level is acceptable for an urban-dwelling hatchback. As with all EVs, the smooth, silent operation is the real draw here and what really differentiates it from other hatchbacks. The E-Pedal is an interesting feature which automatically leverages the regenerative brakes while off throttle to allow for one pedal driving. It’s especially useful during stop-and-go city driving making commutes that much easier. As pleasant as it is to drive, the lack of charging infrastructure combined with the limited range and long charging times means that range anxiety remains an issue for longer trips.

240 kilometres will be fine for urban commutes, but it is just not enough for comfortable long-distance drives. Moreover, EVs don’t mesh well with cold weather, which means you can expect that distance to drop significantly the second sub-zero temperatures hit. Compared to rivals, the Leaf sits somewhere between the longer-range Chevrolet Bolt and Tesla Model 3 (whenever they get around to actually building those), both of which go at least 350 kilometres, and the government compliance-type EVs such as the Volkswagen E-Golf and Hyundai Ioniq EV, each of which go around 200 kilometres per charge. Thankfully, a longer range battery option is coming for 2019 to help the Leaf directly compete with the proper EV offerings. 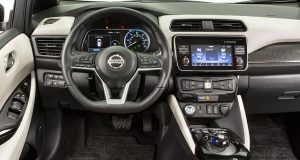 The one benefit of having a smaller battery pack than the longer-range competitors is a more attractive entry price. The Leaf has a starting MSRP of $35,998 and maxes out at $41,998 before fees and government incentives. The sweet spot in the lineup is probably the mid-range SV model which, for $39,598, includes navigation with Apple Carplay and Android Auto compatibility, NissanConnect EV telematics, and Nissan’s ProPilot Assist technology which allows for semi-autonomous driving and highway speeds.

There’s no doubt that making the move to a fully-electric vehicle such as the Leaf comes with a range of benefits. With strategic use of off-peak charge hours, charging a Leaf over a one year period can cost a small fraction of fueling a comparable gasoline vehicle over the same amount of time. The simplicity of the electric drivetrain means that traditional maintenance items, such as oil changes and the rest, are non-existent, which increases the savings further. At the end of the day, the decision to go with the Leaf will ultimately depend on whether buyers can live with the range constrictions, long charging times, and limited charging infrastructure. All electric vehicles come with similar compromises, but until a longer-range battery pack becomes available, the Leaf asks you to compromise more than others.