The executive luxury sedan segment has no shortage of choice. With options ranging from the sensibly understated Genesis G90 all the way to the technology-laden all-electric Tesla Model S, there’s something for anyone with the means to do so. Standing high amongst the selection is the Mercedes S-Class, the flagship of all luxury flagships for as long as it matters, with its three-pointed star ornament standing proud on the hood. The S-Class is considered by many to be the measure of luxury, the benchmark which all others strive to emulate, but never quite manage to top.

The source of its excellence lies in the brand’s brief to make the best car in the world, compounded generation after generation, resulting in a finely-honed and thoroughly engineered product that is always at the cutting-edge of technology and luxury. Much of that technology is designed to create a driving experience as relaxing and comfortable as possible. Take, for example, the Energized Comfort Control. This industry-first system can optimize the climate control, cabin fragrance, seat massage, ambient lighting, and music from the Burmester surround sound system to rejuvenate your body and senses. And that’s only the tip of this technological iceberg.

Look beyond the pair of heavily-featured 12.3 inch widescreen displays situated behind a slab of glass and what you’ll find are only the finest materials all assembled with meticulous attention to detail. The leather is buttery soft and the wood and metal finishes are all presented impeccably well. Heated armrests accompany a pair of comfortable multi-contour seats with various heat, ventilation, and massage settings. The same features are available for rear seat occupants as well, along with an entertainment system, headrest pillows, and an extendable footrest with a chauffeur positon for the passenger side. For those looking for next-level opulence, the palatial Mercedes-Maybach S 650 is available with beyond affluent league accommodations. 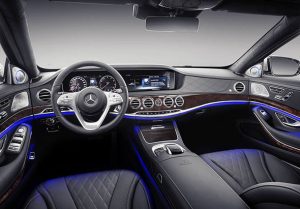 Where most rivals make some effort at sportiness and athleticism, the S-Class maintains a focus on supreme comfort and quietness. The standard air suspension glides effortlessly over rough pavement for a cosseting ride, yet still provides enough body control for confident cornering. This is easily one of the most relaxing driving experiences on the market, and I can think of no car better suited to melting away the kilometres in near total relaxation. It’s outstanding.

Quite suitably, there is an abundance of semi-autonomous active safety technology to help make the drive as effortless as it is comfortable. The most impressive system is the GPS-based adaptive cruise control which can automatically adjust vehicle speed for just about any scenario, including heavy traffic, tight turns, and intersections. It can also perform a full lane-change at the touch of a turn signal. As impressive as they are, I found these systems to be a bit abrupt at times and not as confidence inspiring as I had hoped. Whether it’s from the driver’s seat or the back seat, this is still very much a human-controlled driving experience.

The backbone of the S-Class range is the S 560 tested here, which comes equipped with a twin-turbo 4.0L V8 engine good for 463 horsepower and 516 lb-ft of torque. Power delivery is smooth and effortless, yet totally undramatic for a car capable of hitting 0-100km/hr in only 4.5 seconds. Part of that is thanks to the smooth 9-speed automatic transmission which does its job seamlessly in the background. For those looking for a bit more subtlety or a bit more excitement, the S 560 is flanked by the 6-cylinder S 450 and a pair of AMG models. The high performance AMG line will eventually be whittled down to only the S 63, as the mighty V12-powered S 65 is allegedly ending its run with this generation of S-Class.

Is there anything the S 560 doesn’t do well? Like any six-figure luxury flagship, the cabin is absolutely packed with over the top features and tricks that only exist for the sake of being over the top. The dual widescreen displays are rather overwhelming and many will likely drown in the depths of the many submenus. But that’s all part of the experience and what helps differentiate it from lesser luxury vehicles.

At the end of the day, the S-Class is a trailblazer of ground-breaking technology and a leader in luxury. The only thing more extraordinary than Benz’s greatest accomplishment is imagining where the company will take it next. Only time will tell.