The Range Rover has always been renowned for its ability to blend luxury with off-road prowess without compromising either one. The iconic nameplate has become more luxurious and technologically advanced than ever before, yet it remains one of the best off-roaders despite the fact that hardly any will see anything more treacherous than a gravel road. It’s also more diverse than ever before with a spectrum of models that range from the small city-friendly Evoque to the full-blown Range Rover. Sitting somewhere in the middle of the model range is the Range Rover Velar.

Designed to occupy the narrow space between the Evoque and Range Rover Sport, the Velar fittingly manages to blend design elements of its two showroom mates. The side profile retains the Range Rover Sport’s continuous waistline and floating roof design, only with a more rakish, chop-top look. The lower section appears sleek and modish while retaining a tough, rugged look. My favorite detail are the flush door handles that pop out from the body similar to a Tesla or Aston Martin. It’s easily one of the more stylish SUVs on the market today, and won’t be mistaken for anything other than a Range Rover. 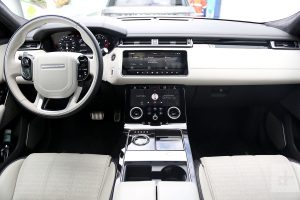 The high level of sophistication doesn’t end with the exterior. On the inside, there’s a fully digital and reconfigurable instrument cluster along with a pair of touchscreens that sweep across the centre console in place of traditional buttons and knobs. They do look incredibly sharp and upscale, but once the novelty wears off, you’ll probably be wishing for a little less form and a little more function. There’s no getting around the fact that the trio of screens are just a little too distracting to properly use on the move, never mind off-road complications such as water and mud. Another concern is the piano black finish which, like the screens, will no doubt be a magnet to fingerprints and dust.

Fittingly, the interior has an abundance of high quality leather and other materials which are a close match to more expensive Range Rover models. Interior space is about average for the class, but the cargo area is a generous size. Strangely, for a sport utility vehicle, the Velar comes short on storage space. The centre counsel is only good for holding a smartphone and not much else. One of the two cup holders is hopelessly shallow, which means that’s only a matter of time before your morning coffee makes a wonderful mess of those fancy touchscreens.

Range Rovers are loved by many for that all dominating king-of-the-road type presence they instill in the driver. It’s an attractive quality that hasn’t been overlooked in the Velar. One area where the Velar doesn’t fare quite so well is outward visibility. Range Rovers of old were characterized by large windows all around and a low beltline that placed the window sill at the right height to rest your arm. Though far better than the narrow window slits of the Evoque, the Velar still sacrifices that airy greenhouse feel and low beltline for the sake of that attractive sheet metal, and that’s a bit of a letdown. 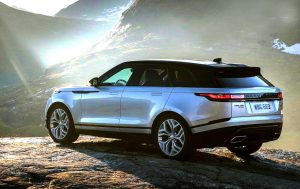 The Velar is still a comfortable cruiser, and it even has the gear to handle itself off-road where no Velar will ever be seen. The lower touchscreen which handles climate control functions doubles as menu for the Terrain Response system, which includes several selectable drive modes for different surface conditions. The Velar lacks a true low-range transfer case, but the level of ground clearance, wading depth, approach and departure angles are all respectable, especially when equipped with the available air suspension. The off-road ability can’t measure up to a proper full-size Range Rover, but it should still dominate just about every other mid-sized luxury SUV. Whether or not those fancy electronics can tolerate that kind of off-road abuse is another matter.

Engine options consist of either a 2.0L turbocharged 4-cylinder diesel or a 3.0L supercharged V6, both of which come paired to an 8-speed automatic transmission. With 380 horsepower and 332 lb-ft of torque, my V6 tester proved plenty powerful with a high level of refinement. It’s definitely the better option, so long as you’re willing to put up with the high fuel consumption. Over a week of mixed city and highway driving, I only managed an average of 14.0L/100km on pricey premium fuel. With a 60 litre capacity, the fuel tank is on the small side as well, which means that you’ll be lucky to get 500 kilometres out of a single tank.

The Range Rover Velar is really more about style and prestige than anything else, and its strengths certainly cater to that. As impressive as it is, I could see a lot of things losing their wow-factor and becoming more of an annoyance than anything else over time. The cool, but gimmicky, door handles. The gorgeous-looking, but kind of distracting to use touchscreens. The heavy fuel consumption and questionable long-term reliability. Even so, the beautiful design, fancy interior, and feeling of specialness that you get driving it probably trumps all of that for prospective buyers. The Velar has a designer driven charm to it that asks you to throw away any minor sensibilities and give in to its desirability. For those who prioritize image and all that comes with it, it’s a request that will no doubt be easily met.