The Kia Rio has been around since the start of the millennium. In many ways, the budget-friendly subcompact’s evolution over that time is reflective of the change that Kia has undergone. In its early days, Kia was basically a low-priced alternative brand for those who wanted a new car, but couldn’t afford a Honda or Toyota. Today though, the brand has made a huge push into the mainstream with cars that can go head-to-head with some of the best in the business. The progress of the Rio over this time has been equally impressive. This one-time basic starter car has evolved into a seriously competent and feature-packed hatchback.

The exterior design is quite attractive and reminiscent of some upscale-looking European hatchbacks, such as the Volkswagen Polo. The interior is well-thought out as well with a nice blend of colours and textures to add a bit of interest. The climate controls have a cool video game controller look to them and are easy to use. The infotainment system is equally straightforward with sharp-looking graphics and a few simple buttons and knobs to compliment the touchscreen. The Rio lacks the flexible “magic” seats and overall space of a Honda Fit, but there’s still just enough room for four passengers and a good amount of stuff in the cargo area.

In typical Kia fashion, the Rio packs a load of features into every trim level. Base LX models include Bluetooth, a leather-wrapped steering wheel with audio controls, heated seats and a heated steering wheel. The next-up EX trim adds climate controlled air conditioning, a larger 7 inch touchscreen with Apple CarPlay and Android Auto, smart key with push-button start, and a UVO telematics system which allows for emergency assistance and control over various vehicle functions with a smartphone app. The top-end EX Tech adds navigation, leather seats, and automatic emergency braking. 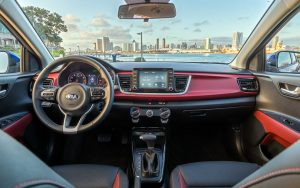 Driving the Rio is a fairly drama-free experience. Maneuverability and outward visibility are both excellent, making the Rio an exceptional urban runabout. The ride quality is acceptably smooth, handling is competent, and the 130 horsepower 1.6L engine provides adequate power in most situations. A 6-speed manual gearbox comes standard, however, most with opt for the available 6-speed automatic. Fuel economy is rated at 8.3L/100km city and 6.4L/100km highway. I averaged a little higher at 8.5L/100km in mixed driving.

Prices start at $14,995 for a base LX, however, most will at least make the jump to the $17,995, LX+ AT, which includes air conditioning and the automatic transmission. A fully-equipped EX Tech comes in at $23,745, which is probably stretching it a bit too high for this segment. Most consumers with that kind of money to spend will probably be happier with a less feature-rich Honda Civic, Hyundai Elantra, or Mazda 3. The same amount could also buy a top-end Honda Fit, complete with active safety features such as lane departure warning and adaptive cruise control which the Rio lacks.

With its combination of great design, high feature content, a strong warranty, and good overall value, the Kia Rio is a strong contender in the subcompact segment. The somewhat ambitious pricing, however, pushes it uncomfortably close to many larger, more appealing cars in the compact segment. With a few additional sales sweeteners such as cash incentives and low interest rate financing that Kia is well-known for, this could make an excellent entry-level car for those who are looking to spend the least, yet get the most for their money.