2018 Jeep Compass - The first generation Jeep Compass was an easy crossover to pass on. With its budget interior, agricultural drivetrain, and depressing reports from owner satisfaction and quality surveys, it was rather hopeless. Even so, I believe it did a few very important things for the Jeep brand. Firstly, it was the first Jeep to come standard with front-wheel drive as well as fully-independent suspension. This gave it a car-like feel, which was revolutionary for Jeep, a brand which built its reputation on truckish off-roaders. And secondly, it gave Jeep a cheap, entry-level crossover, and, let’s face it, cheap is always good. History won’t be kind to it, but there’s no doubt that, in many ways, the original Compass paved the way for other small, affordable crossovers.

Make no mistake though, as an object of desire and joy, the original Compass set the bar ridiculously low. If the latest one were a mediocre crossover, it would be considered an enormous improvement. Fortunately though, the latest Compass isn’t mediocre, it’s actually pretty good.

The Compass occupies a unique niche between the subcompact Renegade and the compact Cherokee. That sounds like an awfully crowded place to be, but given the popularity of the crossover segment, the redundancy will probably pay off. The thing is, the Compass is actually better than either of its showroom mates. It combines the spaciousness and excellent packaging of the Cherokee with the compactness and usability of the Renegade. Also, where those two vehicles have been criticized for being a little too polarizing in terms of design, the styling of the Compass is simple and tasteful. Some have said that it looks a bit like a shrunken Grand Cherokee, which is one of the more handsome premium SUVs out there.

The Compass offers a number of different drivetrain configurations depending on trim level. A simple front-wheel drive setup with a 6-speed manual or automatic transmission is standard on entry-level models. Move up the ladder, and the 6-speed gets traded for a fancy 9-speed automatic. Most trims offer an on-demand all-wheel drive system that’s typical for the class. The Trailhawk model, however, adds locking diffs, a five mode Selec-Terrain system, and other rock-crawling goodies all designed for exceptional off-road prowess. All models use a 2.4L 4-cylinder engine, rated for 10.8L/100km city and 7.8L/100km highway.

I spent a week with the mid-level North 4x4 model, and it proved to be a very pleasant little crossover. The suspension is nicely damped for comfortable cruising, yet it can still handle the corners just fine. The engine could use more power and refinement, but it’s decent enough and well suited to leisurely commutes. Like many FCA products, the interior is very well thought out. The controls are logical and easy to use, and the Uconnect touchscreen is one of the most responsive and intuitive ones on the market. 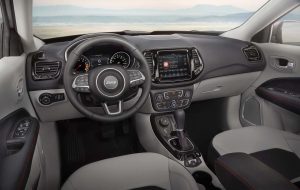 The more I drove the Compass, the more I warmed to it. It’s competitive in just about every measure with the best subcompact crossovers out there. And for those who value off-road capability (at least on the Trailhawk model) and that quintessential Jeep feel, it’s easily a top pick.

With prices ranging from $24,900 for a manual, front-wheel drive Sport model to $34,895 for an all-wheel drive Limited before options, Jeep is banking on consumers paying a premium for those qualities. The Compass is pricier than similar competitors at all trim levels. When fitted with extras such as navigation, panoramic sunroof, and active safety features, the MSRP tops 40 grand, at which point the Compass stops to make any kind of sense whatsoever, at least without some amazing sales incentives.

Next to the price premium, the other hurdle for consumers to overcome will be a reputation for reliability that’s below that of rivals from brands such as Honda and Toyota. Like many Fiat Chrysler products, Jeeps tend to rank fairly low in quality studies from JD Power and Consumer Reports. The optional 9-speed automatic, for example, has accumulated enough complaints in other FCA products to convince me to stick with the simpler 6-speed automatic in the lower trim models. Not only will that help avoid potential issues, it will also keep the purchase price down to a more sensible level.

Overall though, the Compass has more than enough going for it to make it at least worth a look. A Honda HR-V or Nissan Qashqai are more affordable speak to the rational side, but the Compass has that heart-tugging quintessential Jeep quality, and for some, that attraction will be too hard to pass up.