Few vehicles are a better reflection of the current automotive landscape than the Honda CR-V. Crossovers have officially surpassed cars in sales, and it’s fair to say that a good number of those sales are going to CR-Vs. Honda’s compact crossover is a perennial favorite of consumers and one of the best-sellers on the market. After a comprehensive makeover in 2017, the Honda CR-V rolls into 2018 with minimal change, which is probably just how CR-V fans like it.

The CR-V sits on the large end of the compact crossover segment, and that additional room is apparent the moment you step inside. Both the front and rear seats offer plenty of room to stretch out, and a nearly flat floor in the rear means that three passengers can sit across the bench without complaint. The cargo area is massive and includes handy pull tabs to fold the rear seats perfectly flat. The cabin is also filled with useful storage areas including a large bin between the front seats and storage below the adjustable load floor in the cargo area. 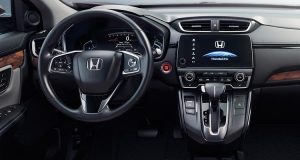 Out on the road, the CR-V is just as comfortable and easy to drive as it is practical. The suspension damping is smooth and compliant, yet taut enough for controlled body motions through corners. Road noise and vibration are nicely supressed as well. Whether its grueling long highway runs or maneuvering through tight city streets, the CR-V accomplishes the task with ease.

The drivetrain consists of a 1.5L turbocharged 4-cylinder engine matched to a CVT automatic transmission. The engine produces 190 horsepower and 179 lb-ft of torque on regular fuel, which is enough to put the CR-V on the quicker end of its class. In terms of fuel economy, I averaged 9.0L/100km in mixed city and highway driving, which is a cut above most competitors as well. Some have expressed concerns over the move towards more complicated CVT and turbocharging technology. Given the drivetrain’s strong performance and Honda’s reputation for long-term reliability, I’d consider it a non-issue.

CR-V pricing starts at $27,090 for the front-wheel drive LX model and stretches as high as $38,490 for a fully-equipped Touring model. For maximum value I’d go with the LX all-wheel drive model for $29,890, which includes Honda Sensing active safety features such as automatic collision warning and mitigation, adaptive cruise control, lane keep assist and lane departure warning with mitigation. 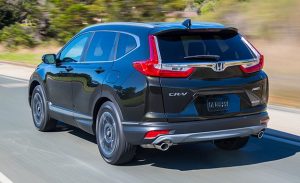 As impressive as it is, the CR-V does come with its share of shortcomings. The exterior styling, for one thing, is not to everyone’s tastes. Honda went with a more utilitarian look in the mold of the Subaru Forester rather than the stylish path of the Mazda CX-5. And the interior, though well-designed overall, uses an infotainment system with an interface that’s a bit dated and somewhat frustrating to use on the move. Thankfully, Apple Carplay and Android Auto come standard. Hopefully the much improved interface of the Accord makes its way here soon.

Minor issues aside, the Honda CR-V is just about the ideal crossover for any situation or, indeed, any crossover shopper. Its compelling blend of versatility, comfort, safety, and efficiency, not to mention solid long-term reliability and ridiculously strong resale value, is just about unbeatable. Reviewing one is just as easy as recommending one, and this is one popular crossover that comes highly recommended.