While certain brands like Toyota have managed to make serious inroads in terms of hybrid vehicle sales, Honda has struggled to produce a highly-popular hybrid of any kind, despite offering the technology longer than most. Perseverance can sometimes pay off, which is why the brand continues to go full-force with the technology and offer models such as this, the Honda Clarity PHEV.

In some respects, the Clarity appears to be a serious effort at mainstream consumer appeal. With similar dimensions to the Accord, the mid-sized plug-in hybrid sedan offers a generous amount of passenger and cargo room with spacious front and rear seats, and a roomy trunk. Though not as sharp and intuitive as the fresher touchscreen found in the Accord, the floating infotainment display works well enough, and is compatible with both Android Auto and Apple Carplay. The materials used throughout the interior are of reasonably high-quality, with a few nice touches such as microsuede and wood-like trim that mimics a high-quality laminate. 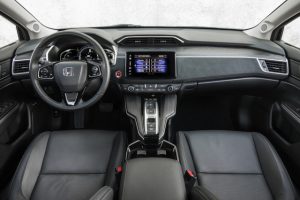 Being a plug-in hybrid, the Clarity offers a dedicated electric range over the regular hybrid mode, which is its real draw over other vehicles on the market. Depending on the temperature outside, the electric mode is good for about 60-70 kilometres before the gas engine kicks in, at which point, the Clarity is good for another 450-500 kilometres or so. Recharging the battery takes about two and half hours on 240V power or about twelve hours with a standard 110V wall outlet. Like all PHEVs, the Clarity requires you to thoroughly assess your driving situation to determine whether or not you’ll be able to take full advantage of that electric range on a regular basis.

Driving the Clarity is a pretty uneventful affair. It rides smoothly with a reasonable amount of power and good sound isolation from the outside. Three drive modes, including Econ, Normal, and Sport, are available, however, I didn’t notice a major difference between them. What’s far more useful are the controls that allow you to hold the battery charge for when it’s most appropriate, such as stop-and-go city congestion as opposed to high-speed highway runs that deplete the range faster. Regenerative braking has four levels which can be controlled using steering wheel paddles, the lowest of which allows for near coasting ability.

For a starting MSRP of $39,900, the Clarity includes features such as heated seats, backup camera, 8 inch display with HondaLink Apps, and a comprehensive list of active safety technology including forward collision mitigation braking, lane departure warning with lane keep assist, adaptive cruise control, and Honda’s LaneWatch blind spot display. The Touring trim adds navigation, leather seats, additional colour options beyond just grey and white, and few other extras which, altogether, don’t appear to be worth the $4,000 upcharge. Notable options which the Clarity lacks on either trim include a heated steering wheel, power-adjustable seats, and a sunroof.

As far as plug-in hybrid’s go, the Clarity has enough going for it to hold its own against the Chevrolet Volt, Ford Fusion Energi, and Toyota Prius Prime. Overall though, I’m not convinced that it makes a strong enough case to overlook its arguably more appealing showroom mate, the Honda Accord Hybrid. Compared to the Clarity, the Accord Hybrid offers more features, a far more enjoyable driving experience, and much more attractive exterior styling as well (emphasis on much). Yes, some provinces offer electric vehicle incentives which helps narrow the price difference, but even so, the Clarity asks for a lot of concessions in exchange for a bit of electric range. Take away the incentives, and you’re left with another hard sell that fits right into a long line of sales-proof Honda hybrids.