It’s no secret that consumers are increasingly rejecting traditional cars in favour of trendy high-riding crossovers. Despite their dwindling popularity, midsized sedans remain an important offering for automakers, only now it’s more a matter of survival of the fittest. That being the case, natural selection would favour the Honda Accord, which has long been a benchmark and sales leader in the midsized sedan segment.

The Accord has always been a very good car. A little boring at times perhaps, but you’d never question anyone’s decision to purchase one. The latest model, however, is so impressive and well-rounded that it really makes one question the point in spending significantly more on a luxury sedan. It was a thought that occupied my mind throughout the entire week I test drove it.

For starters, there’s the interior, which has a genuine upscale aura that looks and feels more premium than the interiors of most Acura models. Striking details include the faux open-pore wood trim and backlit climate control dials that change colour as you turn them. The infotainment system is sharp-looking and easy to use, with actual buttons and knobs on each side of the screen. Interior room is quite generous with the backseats offering a limo-like amount of legroom. 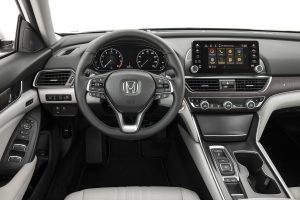 The Accord’s alignment with higher-tier luxury cars continues in the drivetrain department as well, where high-trim models come equipped with a 2.0L turbocharged engine matched to a 10-speed automatic transmission. At 252 horsepower and 273 lb-ft of torque, the 4-cylinder engine has more than enough power to pull the Accord along nicely at any speed. With 10 gears to go through, the transmission is quite busy, but, for the most part, manages to find the right gear at the right time. For those who prefer to row their own gears, the Accord is available with a 6-speed manual gearbox on the LX and Sport trim levels.

As with most automakers, Honda’s move towards more complicated drivetrains has to do with improving emissions and fuel economy. Unfortunately, over a week of mixed city and highway driving, I only saw an average of 10.5L/100km. That’s no better really than the Toyota Camry  which uses a well-proven and less complicated naturally-aspirated V6 engine and 8-speed automatic transmission. Below the 2.0L engine in the model range is the same 1.5L turbo 4-cylinder and CVT transmission found in the Civic and CR-V. In addition to providing ample power at 192 horsepower and the same amount of torque, this engine has a better fuel economy rating of 8.9L/100km city and 6.7L/100km highway. 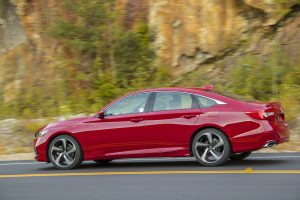 The Accord scores mostly high marks in terms of ride quality and handling performance. The ride is smooth and relaxing, but not to the point where it feels like a wallowy mess when cornering. The Touring 2.0 comes equipped with adaptive dampers which are able to firm up the suspension for a sportier ride. I wouldn’t call it a sport sedan, but the Accord is able to take a corner while feeling confident and composed. It’s the kind of solid feeling, well-sorted ride and handling you’d expect from a properly engineered sedan.

The Accord lineup starts with the LX trim which goes for $26,490 with a manual gearbox or $27,790 when equipped with the CVT automatic. Prices top out with the Touring 2.0 at $38,790. For me, the sweet spot in the range is either the EX-L or Touring trim equipped with the 1.5L engine which go for $32,490 and $35,790 respectively. Both offer loads of equipment while forgoing the 2.0L model’s finicky push-button gear selector, higher fuel consumption, and higher price.

After a week of driving, what’s clear is that the Honda Accord is a tremendously well-designed vehicle that’s not afraid to step on the shoes of far more expensive luxury sedans, including Honda’s own Acura lineup. Aside from offering all-wheel drive and a more charismatic V6 engine, there isn't single thing that the similarly-sized Acura TLX does better than the Accord. In fact, it does some things worse. The same holds true for other luxury car offerings with significantly higher price tags. Is the Honda Accord a luxury car? No. But it holds nothing back in trying to be the best midsized sedan it can be, and the result is a real winner.

By Adi Desai JASPER, ALBERTA – Despite the abundance of crossovers and sport-utility-vehicles taking more and more of the Canadian automotive market share every single month, the midsize sedan is still a very popular choice that […]