For the traditional BMW enthusiast more interested in steering feel than cargo room, the BMW X3 is a tough vehicle to get excited about. In a world dominated by the increasingly popular SUV, however, the X3 is an important cash-cow and a top seller for the Bavarian brand. The compact luxury crossover segment, which the X3 practically invented, has become loaded with excellent options. Many fully-optioned non-luxury crossovers are now impressive enough to make a compelling case as an alternative pick as well. As such, it’ll take more than a roundel badge and top seniority to maintain dominance in this crowd.

From a visual standpoint, the X3 isn’t exactly an eye-catching heartthrob. The M40i trim adds a few sporty M garnishes, but even so, the X3 just looks a tad too generic, especially next to stylish competitors such as the Jaguar F-Pace and Range Rover Velar. The interior though is properly upscale with nice finishes and a good amount of space. The X3 is now as large as the first generation X5, and it shows. Both the front and rear seats offer plenty of room for up to five passengers. The cargo area too is quite spacious and includes useful levers to collapse the rear seatbacks. 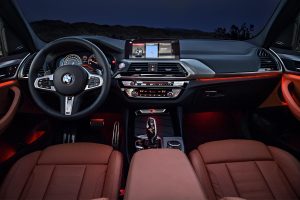 The X3 offers a wide assortment of available technology. The iDrive infotainment system is well designed and can be controlled through touchscreen, voice, touchpad dial, and even (somewhat gimmicky) gesture controls. Fans of traditional buttons and knobs will feel right at home with a centre stack filled with user-friendly audio and climate controls. In terms of active safety features, the X3 includes approach, lane departure warning, and collision prevention systems as standard equipment. An optional Advanced Driver Assistance Package adds semi-autonomous driving capability for highway driving as well as an automated parking system with a cool surround view camera.

The entry-level X3 xDrive30i model comes equipped with a turbocharged 2.0L 4-cylinder engine producing 248 horsepower and 258 lb-ft of torque, which puts it on par with most rivals. The one to go for, however, is the M Performance M40i model tested here, which gets BMW’s famous turbocharged 3.0L inline-6 producing 355 horsepower and 369 lb-ft of torque. Power delivery is buttery smooth and surprisingly strong with a pleasing snarl thanks to an M Sport exhaust system. With a rated 0-100km/hr time of only 4.8 seconds, the X3 M40i is also easily one of the quickest compact crossovers on the market. It’s even reasonably efficient, with a week of spirited driving yielding an average of 12.0L/100km. 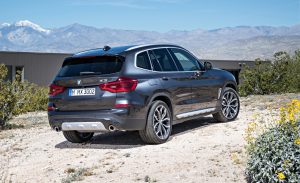 Part of that impressive straight-line pace is the result of a smart-shifting 8-speed automatic transmission and a rear-biased xDrive all-wheel drive system, both of which come standard on every model. The M40i enhances performance further with an M adaptive suspension and a larger wheel and tire setup complete with M Sport brakes. The result is a ride and handling balance that’s impressive for a high-riding crossover. The X3 M40i turns into corners crisply with excellent grip and body control. Inevitably, being a crossover, it’s not as sporty as the equivalent 3-Series, but as far as SUVs go, this is one of the stronger performers out there.

The additional performance of the M40i does come at a significant price premium. Where the X3 xDrive30i starts at $48,000, the X3 M40i commands $61,500, with options easily pushing that price well above 70 grand. Even so, I do think that a lightly optioned M40i is the pick of the X3 range. Stripping away that inline-6 engine and its associated performance and what you’re left with is a nice, but sort of generic, luxury crossover with little to differentiate it from its competitors. If that’s all you’re after, a far less costly to own Acura RDX or even a fully-equipped Mazda CX-5 will do the job just fine for much less. Being both a crossover and a BMW, any version of the X3 will be a hot commodity. The X3 M40i, however, goes beyond hot commodity and takes a shot at being exciting and a little bit special.