Back in the 1980s, BMW was taking aim at the Mercedes S-Class with its 7-Series luxury flagship. The S-Class had the edge with its mighty V8 engine, giving it bragging rights over the 7’s smaller straight-sixes. Rather than go head-to-head with a V8 of their own, however, BMW came out with a trump card – a brand new V12 engine. It was the first to be built in Germany since the 1930s, joining an exclusive club occupied only by Ferrari, Lamborghini, and Jaguar. It turned out to be a wise move. The V12 gave the 7-Series an unmatched level of power and refinement. Mercedes would eventually react with a V12 of their own, which was probably a sign of the threat conjured up by BMW.

The tradition of V12-powered flagships continues to this day with cars such as this: the BMW M760Li xDrive by M Performance. That’s right. Even though it’s not technically a full-on M car, the 7-Series finally gets a sprinkling of that BMW M magic.

The centrepiece is the twin-turbocharged 6.6L V12 engine, shared with Rolls Royce, which produces 601 horsepower and 590lb-ft of torque. It’s a silky-smooth unit with enough twist to move this luxury-limo from 0-100km/hr in a mere 3.7 seconds. It certainly feels every bit the straight-line weapon that it is. The crisp-shifting ZF 8-speed automatic offers a manual mode with paddle-shifters, however, I found it more fun to just leave it in drive, plant your foot to the floor, and hold on for dear life. The noise it makes is a pleasing V12 growl befitting an M badge. Go gentle on it, however, and it operates in near total silence. 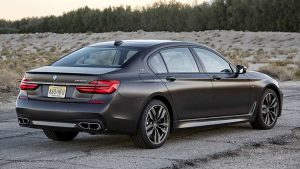 Despite the insane performance, what’s immediately clear about the M760Li is that it was designed to be a 7-Series before an M car. BMW has packed in loads of tech to make it feel far sportier than its enormous size and heft would suggest. A rear-biased xDrive all-wheel drive system works with M-tuned four-wheel steering, adaptive suspension, and active anti-roll bars to control movement and body motions without sacrificing ride quality or refinement. Regardless of whether it’s being hustled through the corners or stretching its legs down the freeway, the M760Li never loses its composure or its suppleness. It’s incredibly capable, but still a little too big and heavy to be what I’d call engaging.

On the outside, the M760Li differentiates itself from lesser models with a full M Performance aerodynamic package, M Sport brakes, 20 inch M light-alloy wheels wrapped in Michelin Pilot Super Sport rubber, and an M Sport exhaust system with large tailpipe finishers and active flaps for that throatier sound. None of the garnish, however, is quite as eye-catching as the available Frozen Dark Brown Metallic paint of my test car, which has a stunning matte sheen to it. 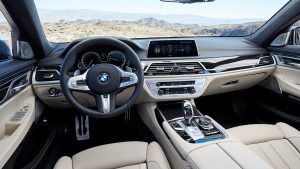 Changes to the interior from other 7-Series models are far more minimal, but it’s still just as opulent and feature-heavy as one could reasonably imagine. Front seat occupants enjoy multicontour seats covered in soft Merino leather, beautiful wood trim with coloured accent lighting, and an endless array of gizmos and semi-autonomous technology. With the available rear-seat package selected, backseat riders get a portable tablet which controls everything from the multi-massage reclining seats, to the motorized sunshades and lighting, to the rear-seat entertainment screens. At the push of a button, the front passenger seat can even be motorized forward and deploy a footrest for extra leg-stretching relaxation.

There’s no question that the M760Li is a paragon of refinement and incredible performance. It’s even something of a bargain if you can call a six-figure priced car that. Where a Mercedes-AMG S65 commands $253,300 to start, the M760Li xDrive entry price is a comparably reasonable $162,200. The real question is whether to go with the M760Li or BMW’s own Alpina B7 (Tested Here). The B7 is arguably more exclusive with similar straight-line performance and more playful handling thanks to a lower curb weight. For some, myself included, it’s the better choice. For others, however, nothing can top the appeal and bragging rights of a V12 under the hood. Either way, BMW’s got you covered.