BMW M550i xDrive - There was a time when the BMW 5-Series was considered the gold standard of midsized luxury sedans. If you chose to buy a Mercedes E-Class or an Audi A6, you chose wrong, because the 5-Series was just better. Nothing could quite match its genius blend of thoughtful design, executive-class luxury, and scalpel-sharp driving dynamics. That scalpel bit, however, has grown a little dull over the past few generations to point where the 5-Series is no longer the benchmark driver’s car it once was. If there’s one version of the 5-Series capable of proving that the BMW magic is not lost, it’s surely the one with an M badge on its trunk lid, the M550i xDrive.

BMW’s M Performance model certainly has its work cut out for it, including when it comes to the looks department. It’s not that the 5-Series is a bad looking car. It’s not. The design is clean and sophisticated with that typical Germanic business executive-like quality. The issue is that it’s also rather bland, underwhelming, and so similar in appearance to the previous generation 5-Series that you’d be hard-pressed to tell the difference between the two. Fortunately, the M550i’s M specific garnish does help dress things up quite a bit. The major bits include an aggressive M aerodynamics package, unique tailpipe finishers, and nicer rims with sporty-looking blue brake calipers. 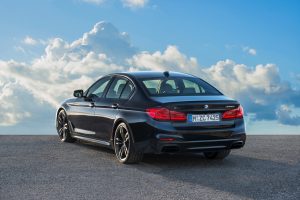 The 530i and 540i models may do the trick just fine for most, but the M550i is the one that will get your adrenaline pumping when a dose of excitement is needed. Much of that is thanks to the twin-turbocharged 4.4L V8 engine under the hood. Downsizing may be in trend, but nothing can quite replace the addictive power and satisfying snarl of a proper V8. With a peak output of 455 horsepower and 480 lb-ft of torque, the M550i is capable of hitting 100km/hr in only 4 seconds, apparently quick enough to beat out the previous generation M5. It easily outpaces its nearest rivals, feeling almost rocket-like in power delivery. The engine doesn’t deserve all the credit. Part of it is thanks to a grippy all-wheel drive system and a slick 8-speed automatic transmission that changes gears both quickly and intelligently.

It takes far more than just sheer speed, however, to earn an M badge. The adaptive M suspension, 10mm lower than other 5-Series models, combines with the rear-biased xDrive all-wheel drive to help maintain balance without sacrificing ride quality. I’d recommend opting for the available active roll stabilization and rear-wheel steering to further enhance cornering performance. My test car lacked these options, which might explain the noticeable body motions when pushed through the corners, even with Sport+ mode selected. Try as it may to defend its sport sedan credentials, the M550i is really more of a big, supple grand tourer than a precision corner-carver. It leaves the sharp-edged heroic handling antics to the M5 and instead focuses a little more on the pampering side of luxury. 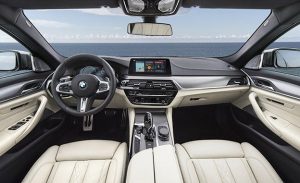 It’s clear that BMW put more effort into refinement and comfort, especially given the brilliance of the interior. When properly equipped, the 5-Series doesn’t give up a whole lot to the far more expensive 7-Series. The fit and finish and use of materials are top notch. I especially like the accent LED lighting used to highlight the trim around the cabin. The available comfort seats are just that, offering heating, ventilation, and number of soothing massage settings. The iDrive infotainment system is sharp and effective, with a nice compliment of user-friendly buttons and knobs for common tasks. The 5-Series also offers a number of advanced semi-autonomous driving assistants as well as the ability to park the car from the outside with a remote.

All things considered, the M550i xDrive is an impressive luxury sedan with a driving experience that’s largely defined by its engine. As capable as it is, it still ultimately lacks the precise handling and engagement that used to be a given on every BMW. Both the similarly-priced Mercedes-AMG E43 (Tested Here) and Lexus GS F are noticeably stronger performers in this regard. Even so, there’s no denying the desirability of the M550i’s rocket-like straight line pace, impressive comfort, and richly-appointed, user-friendly interior. It’s a significant step up from the comparably tame 530i and 540i models, yet still leaves plenty of room on the table for the full-blown M5. If that sounds like the sweet spot to you, the M550i might just make the perfect partner.