2017 Mazda CX-9 Signature - Like most family-type vehicles, 3-row crossovers are something of a bore. It doesn’t really matter whether you look at an offering from Honda, Toyota, GM or whatever. They are just not that pretty, enjoyable to drive, or that special to own. If there is one car company capable of defying that trend, however, it is Mazda. Time and time again, the small Japanese automaker has turned out cars of all types that are always stylish and fun to drive. The CX-9 is no different.

In terms of design, the CX-9 is without a doubt one of the more attractive offerings both inside and out. It has an upscale look and feel that would mesh well with a luxury badge. The interior of my Signature model test car felt especially luxurious, with nice details such as real rosewood trim, made by Japanese guitar maker Fujigen, and soft Nappa leather upholstery. The centre console wraps around a BMW-like control knob and nicely-damped buttons which controls a display screen on the dash top. The driver even gets a colour head-up display which shows speed and navigation information.

Large crossovers are obviously not made to assault winding roads, but if pressed to pick one for the job, the CX-9 would be it. The steering and suspension are dialed in just enough to make easy work of corners, yet the ride remains fairly supple when cruising. The drivetrain consists of a 2.5L turbocharged 4-cylinder mated to a 6-speed automatic transmission. The engine produces 227 horsepower and, more significantly, a healthy 310lb-ft of torque, while still returning 12L/100km in the city and 9L/100km highway. In terms of both power and fuel economy, the CX-9 is one of the best in class. 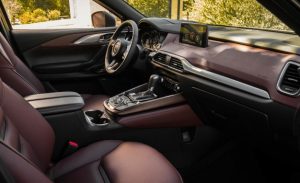 If there’s one area where the CX-9 falls a bit short, its spaciousness. Front seat occupants have nothing to complain about really. It’s the middle and third row where things get a bit tight. The third row bench in most crossovers tends to be rather tight, but in the CX-9, they are borderline claustrophobic. Moreover, the middle row seats are tricky to adjust, and don’t return to their original position. The space in the rear hatch with the seats positioned up or down is pretty good, but even so, there’s no getting around the fact that the Toyota Highlander or Honda Pilot simply have a tad more room to play with.

Prices start at $35,600 for a front-wheel drive GS model and climb to $50,100 for the fully-optioned Signature model. The one to go for, however, is the well-priced GS-L which, for $41,500, includes leather seats, sunroof, heated-steering wheel, blind-spot monitoring, and all-wheel drive. Navigation isn’t included, but can easily be added with an SD card for $425 as a Mazda accessory. Overall, the GS-L’s pricing is on par with the equivalent Hyundai Santa Fe XL and Nissan Pathfinder, but 2-3 grand cheaper than the equivalent Toyota Highlander and Honda Pilot. The 3-row Kia Sorento EX, however, does undercut the CX-9 by a few grand before incentives.

Seven seats be damned, this is one satisfying crossover. I had an opportunity to drive a similarly-equipped 2017 Acura MDX around the same time as my test with the CX-9, and the luxury-ute didn’t strike me as an upgrade given its luxury badge. It’s not quite as spacious as some of its rivals, but its long list of strengths, including strong performance, great fuel economy, and a stylish, upscale exterior and interior, easily put it near the top of the 3-row crossover segment.