2017 Lexus IS200t and IS350 - The first thing that you need to know about the Lexus IS is that it’s not a Lexus in the traditional sense. The brand has always had a strong focus on quality, reliability, and dullness. That last point is where this little sport sedan breaks the trend. Unlike many Lexus models of the past, its trump cards have little to do with being beige and docile.

Nowhere else is this more evident than in the styling. The IS forgoes the understated elegance angle of its luxury car competitors and instead goes for an edgy, aggressive, even polarizing look that’s sure to grab attention. I’m not exactly sure if I’d call it stylish, but it is certainly striking, and one of the better looking models in the Lexus lineup.

The bold theme continues to the inside, where you’ll find touch-sensitive controls, body-hugging sport seats, and some cool LFA supercar-inspired details like a side-sweeping tach/speedo gauge.  Everything looks and feels like typically high Lexus quality, and there’s plenty of room for four to sit comfortably. My only complaint is the mouse-like controller for the center display screen, which is far more fidgety and distracting to use than the rotary-style controllers found in many competitors. The cursor never quite goes where you want it to, and makes simple tasks more frustrating than they need to be.

One control I did find myself using was the one for the various drive modes. Along with the many nice interior touches, this features comes as part of the F SPORT package. At the touch of a button, the IS can go from a refined, luxurious cruiser, to a sharp, corner carving, sports sedan. In Sport S+ mode, it feels incredibly well tuned for aggressive driving. Go back to Normal mode, however, and everything is dialed down just a notch to a level that makes congested city commutes feel quite pleasurable. 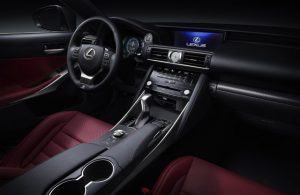 For this test, I sampled the entry-level IS200t and the top of the range IS350 over a two week period. The latter uses a pleasantly smooth and punchy 3.5L V6 engine and is equipped with all-wheel drive. Even though it lacks the fancy turbocharging and engine start/stop technology offered in some rivals, I find its lack of complexity refreshing. With 306 horsepower and 277lb-ft of torque, it may not be the most powerful, or even the most fuel efficient, engine in its class, but the less complicated design should serve it better from a long-term reliability and cost of repair standpoint. Same goes for the volume seller IS300, which comes with the same engine detuned to 255 horsepower and 236lb-ft of torque.

The IS200t gets a 2.0L, turbocharged 4-cylinder engine producing 241 horsepower and 258 lb-ft of torque. It’s decent enough, but few will go for it simply due to the fact that it only comes with rear-wheel drive, which Canadians unjustifiably avoid like the plague. It is also very close in price to the more desirable next-up IS300, which does come with all-wheel drive. Rear-wheel drive sells in a top-tier high performance sedan, but not in an entry-level one. Indeed, at the time of writing, a quick search on Autotrader showed that there were 122 brand new IS sedans for sale from dealerships, and not a single one was the IS200t.

Prices start at $40,150 for the entry-level IS200t, $42,950 for the IS300, and $53,350 for the range-topping IS350. My pick would be the IS300 equipped with the F SPORT Series 1 package for $46,750. Not only is it well-equipped for the price, but it also forgoes the widescreen navigation and the fiddly mouse controller. Instead, it uses a far simpler rotary dial to control a smaller screen, which I’d happily live with. My phone can perform navigation duties if it means avoiding that cursed cursor.

Nitpicks aside, the IS sedan is a seriously good performer. It manages pull off that once unmatchable BMW 3-Series skill of combining luxury car refinement with a bit of sports car-like dynamic ability. All of the gadgets one would expect from a luxury ride are offered. The best part is that it offers all of this while boasting Lexus quality and reliability. Unlike the Germans, repair costs won’t spiral out of control when the warranty ends. It should also hold its value better than most, thanks to top-notch Lexus resale values. In the past, the IS was merely the safe, but subdued, choice of its class. Now though it’s just the smart choice.