The Honda Pilot has been a trusted steed for many families going on two decades now. For many Honda loyalists, it has been the natural choice as young families grow and develop the need for more space. It delivers on the space, security and comfort that families are looking for, without succumbing to the minivan stigma, all while maintaining a level of car-like driving dynamics. The basic Pilot LX starts at a reasonable $40,000, and typically Honda, there are five different trim levels to select from rather than à-la-carte option packages. This 2017 Honda Pilot Touring AWD is the priciest at $51,490, and represents the biggest and best non-minivan family transportation that Honda has to offer.

On the exterior, not much has changed since the Pilot’s 2016 refresh, but it is a fairly handsome unit. However, sharing a lot of its basic shape with other crossovers in the market means it’s not highly distinctive. The Touring trim does feature projector LED headlamps, which are phenomenal at night and distinguish it from the rest of the Pilot lineup, along with a set of good looking 20” alloy wheels. The exterior dimensions are vast and standing next to it, the Pilot looks wide, tall and long; much more so than previous generations as the SUV battle for interior space rages on.

The benefits of the increased dimensions are visible inside the Pilot with cavernous head and leg room for second row passengers, and a third row that is much more usable than previous iterations. The third row chairs do significantly cut into the cargo area though, as expected, and even for a normal grocery run they had to be folded away. Happily, folding any of the rear seats is as easy as pulling a lever or pull cord and they fold almost perfectly flat. That opens up a very usable cargo space, with one small issue. The stylish curve of the roof cuts into the dimensions of the rear hatch opening, which makes loading bulky cargo more difficult than it needs to be. This is a common issue with newer more sporty-looking SUVs in contrast to their predecessors with much more squared off rear loading areas.

The heart, and biggest selling feature, of the Pilot is its interior. It’s very obvious that the design team has put a lot of thought into building a family-friendly space. Every inch has been thought out to optimize storage and convenience; the front door panels offer two levels of storage pockets, the centre console is massive and features a huge storage bin with a recessed lid perfect for keeping items that you’ll carry with you in and out of the car, like your phone – it’s one of the best centre consoles in the business. The rear console between the two captain’s chairs is just as well planned. Another example is the input jacks, including HDMI input, for the Touring’s 9” rear Blu-Ray player. These input jacks are on the back of the front centre console, easily accessible and down low for clean cable management.

The interior is also extremely quiet, with dual pane glass and plenty of soundproofing to keep outside noise out, a trait that’s of critical importance on any vehicle that’s likely to see some extended family road trips. One thing that might be enough to deter one from taking the Pilot on any really long trips unfortunately is the front seats. Even with the eight-way power adjustment on the driver’s side, I found it challenging to achieve the perfect position for long-distance comfort. 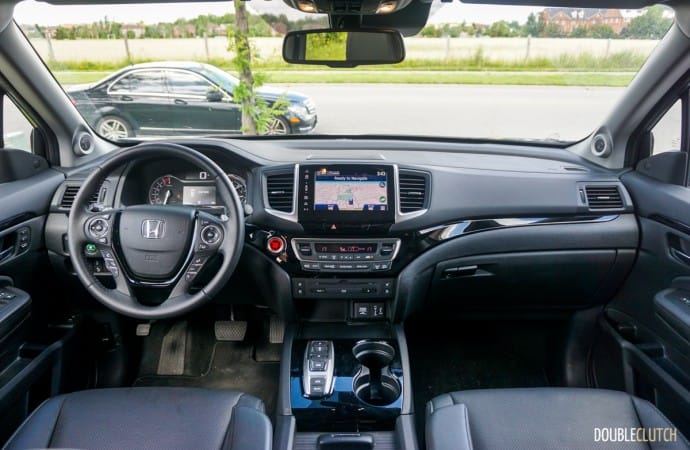 The Touring is loaded with luxury gadgets like heated and ventilated front seats (heated second row too), a moonroof up front and a fixed panoramic glass roof in the rear, rain sensing wipers, heated steering wheel, and Honda’s suite of safety assists (Lane Departure Warning, Lane Keeping Assist, and Adaptive Cruise Control, among others). The Pilot also gets the latest version of HondaLink with navigation. The touch screen is responsive, and the menu system is fairly intuitive and easy to use. Adjusting the audio volume is still an annoyance, but sound quality is good from the 540-watt, ten-speaker system.

Under the hood you’ll find Honda’s “J35” 3.5L V6 with direct injection. Output is 280 horsepower at 6,000RPM, and torque is rated at 262 lb-ft. at 4,700RPM. These are decent numbers and enough for the Pilot to feel peppy at city speeds. On the highway or under hard acceleration the V6 does run out of breath quickly, making the Pilot seem rather sluggish. Where the V6 really does show its worth though is power delivery which is buttery smooth and refined, just the way a family SUV should be.

Among all the recent fuel economy concerns, many manufactures are tossing the V6 to the wayside in favor of boosted four-cylinders and try as they might, few come close to a traditional V6 in terms of smoothness and throttle response. Honda has stuck with the 3.5L, which has gone through many iterations since its original introduction in the mid 1990s, and have built a motor than can deliver both on power and refinement, while keeping up with the latest fuel economy requirements.

The Pilot averaged 10.6L/100km during a week of mixed rush hour commuting. That’s outstanding for a large seven-seater SUV with the air conditioning on at all times, and a heavy all-wheel-drive system on board. The Pilot, unlike its Acura MDX cousin, is also happy to run all day long on regular 87-octane fuel.

Some of that fuel economy is owed to the ZF-built nine-speed transmission that comes only on the Touring trim of the Pilot. The ZF transmission is actually a German-made unit that has received a barrage of negative reviews for its quirks and clunkiness in many of the Chrysler applications that it has been installed in. Honda received similar feedback on initial launch of the transmission in the Pilot last year, but it appears that some recalibrations and updates have the issue mostly resolved. In this test vehicle, the ZF delivered timely firm quick shifts regardless of speed or throttle position. The only exception is a very occasional harsh downshift while decelerating to a stop. The nine-speed does also feature paddle shifters.

The electronic steering is very light and easy, but retains confident on-center feel while cruising on the highway. The suspension is exactly what you might expect from a Honda SUV, just firm enough to provide a touch of extra response, but still compliant and easy on the city’s rougher roads. Save for the less-than-perfect front seat comfort, the Pilot makes a very nice highway cruiser for all passengers.

The 2017 Honda Pilot Touring AWD has a lot to offer for families, and its continued popularity suggests that it’s on course to continue as a leader in the segment. That said, the top-line Touring trim is pricey relative to the competition, and while the Touring does offer a few extra features, and the new (but storied) nine-speed, it certainly wouldn’t hurt to cross shop competitors like the Toyota Highlander or Kia Sorento as a value comparison. Regardless, the Pilot, in any trim, is a dedicated family hauler that has been put together with that very intention, and all of its little details come together to deliver a very effective and practical SUV.