2017 Chevrolet Bolt - Electric cars have been on the market for quite a few years now. Aside from Tesla though, none have managed to really spark the interest of consumers. Too few seem willing enough to take a chance on the unfamiliar technology, especially given the fact that many of the current offerings come with a high purchase price and a low driving range.

The Chevrolet Bolt aims to change all of that. With a starting MSRP of $30,706 (including a $14,000 after-tax Ontario incentive) and a driving range of up to a claimed 383 kilometres, the Bolt could be the electric car for the people that we’ve been waiting for. It appears to be proof that not only are electric cars here to stay, they may be ready to make a move into the mainstream market in a potentially revolutionary way.

With an MSRP lower than the national average for new vehicle sales (about $33,000), buyers will get a tall hatchback with seating for five, a spacious trunk, and a list of standard equipment that includes the bare essentials. $750 adds heated front seats and a heated steering wheel to the base LT trim. For leather seating and active safety features such as automatic braking and lane departure warning, buyers will be have to move up to the Premier trim, which has a starting MSRP of $35,706 after the provincial incentive. Strange enough, navigation isn’t available on either trim at this point.

On the surface, it’s rather difficult to see what all the fuss is about. The Bolt has a rather generic sort of hatchback look that shouts ordinary more so than special. The same is true of the interior, where everything appears to be rather functional and practical, but somewhat cheap-feeling for a vehicle that starts at over 30 grand. There’s an interesting mixtures of textures and colours, and the large touchscreen is both sharp and user-friendly, but even so, nothing really pops out as super futuristic. 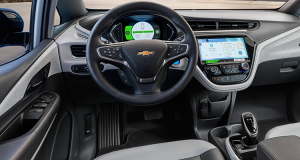 On the move though, the Bolt tells a whole different story. Being a full electric car, the driving experience is dominated by a level of smoothness and quietness unmatched by anything in the internal combustion world. Not only is it incredibly refined, it’s a lot of fun as well. The skateboard-like battery pack in the floor keeps the weight nice and low, which means that the Bolt has no problem being chucked into corners with great enthusiasm. The acceleration provided by the electric drivetrain is impressive as well. Thanks to a torquey drivetrain that provides a huge shove right off the line, the Bolt can launch itself from 0 to 100 kilometres per hour in as little as 6.5 seconds. That’s V6 engine level acceleration.

The more I drove the Bolt, the more I was won over by its enjoyable driving experience. The initial purchase price may be 8-10 grand higher than that of the equivalent gas-powered hatchback, but it’s a premium that can easily be recouped over the long-term ownership period. Other than the occasional tire rotation and general inspection, the Bolt requires very little in the way of maintenance when compared to a gas vehicle. Moreover, the annual cost of charging a Bolt is only a fraction of the annual cost of refuelling a comparable gas-powered hatchback over the same distance. Actual results will vary depending on the price of electricity and gasoline, but the strategic use of off-peak charging hours at night can help maximize those savings.

General Motors may have conquered range anxiety by giving the Bolt a genuinely usable real-world driving distance of around 350 to 380 kilometres, but the same cannot be said of charging times. On a 240V Level 2 charging station, the type most owners would find around city and install in their driveway, the Bolt takes a lengthy 9.5 hours to fully charge from empty. Using a regular 120V wall outlet increases that time to a barely usable 26 hours. A level 3 quick charger reduces that time to as little as two hours, but those are still few and far between. The charging infrastructure in and around major cities is certainly growing, but it is still in its infancy, and finding a charge on the go can prove to be a challenge. The technology is ready. It’s time for municipalities to catch up.

Options among full electric vehicles are still limited, but the Bolt does have a few rivals. The Tesla Model 3 is the most notable one with a superior charging network, more attractive styling, and top-notch brand appeal. The Nissan Leaf is a strong competitor as well. The Bolt, however, is the only one that can claim the accolade of kick-starting usable electric cars into the mainstream.

There are plenty of electric cars that are little more than automotive oddities. The Bolt though is no engineering experiment or some irritant that eco nuts have to put up with in order to help save the earth from fossil fuels. It’s a genuinely affordable, fun to drive, useful hatchback that just so happens to be a smooth and silent electric car with zero emissions, a proper driving range, and incredibly low running costs. There is still plenty of room for improvement, but the sound of big change is coming to the automotive world. Who knew it would be the sound of silence?