With mid-sized sedans dwindling in popularity, automakers have taken on new strategies to deal with the changing market. Some have chosen to experiment with sportier, coupe-like designs in an effort to stimulate interest, while others have decided to just simply pull out of the segment altogether and focus their efforts on designing more crossovers. Nissan’s approach is a little bit different. Rather than simply redesign or discontinue the Altima, the brand has decided to reinvent it as a somewhat uniquely positioned sedan alternative to the popular crossovers. The way they have accomplished this is by making all-wheel drive standard on every model.

The addition of all-wheel drive to the Altima is a clever strategy and one that makes it stand out among its popular rivals such as the Toyota Camry and Honda Accord. Anything that helps the Altima stand out is a good thing, because, in most other respects, the Altima is pretty much just another ordinary mid-sized sedan. 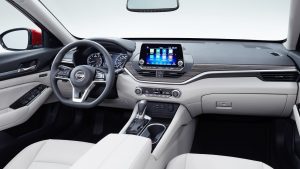 In terms of design, the Altima makes use of a few stylish details including LED-accented headlights a sharp crease along the vehicle’s beltline, and a prominent grill design. Overall, it is a solid look, but perhaps a tad too conservative for the remaining sedan worshipers who really need some seriously attractive styling in order to convince them to look away from competitors. The interior is equally reserved in terms of appearance, but at least everything is straightforward and ergonomically sound. A large touchscreen sits atop the dash above easy to use climate controls. The graphics are somewhat flat, but the menu structure is clear and the system is compatible with both Apple Carplay and Android Auto. Spaciousness is about average for the class, and the cabin has a nice airy feel to it thanks to a relatively low beltline.

A morning spent on some snow covered roads and a track outside of Montreal gave us the opportunity to put the Altima’s all-wheel drive system to the test. Though it lacks the advanced torque-vectoring available on some other AWD systems, the Altima did a fine job of navigating over slippery surfaces with the AWD system ensuring that traction was always available. The chassis tuning seems well judged with fairly compliant suspension and good body control through corners. It’s no sport sedan, but for those looking for an all-wheel drive vehicle more dynamically gifted than the average crossover, the Altima is about as good as it gets.

All models come equipped with a naturally-aspirated 2.5L 4-cylinder engine matched to a continuously variable transmission. The engine produces 182 horsepower and 178 lb-ft of torque, numbers which are a bit lower than that of most competitors but still adequate for day-to-day driving. The fitment of all-wheel drive usually comes with a small penalty to fuel economy, but in this case, the Altima seems to just about match its front-wheel drive rivals. It is rated for 9.1L/100km in the city and 6.5L/100km on the highway, which is quite impressive, though our brief test drive on mostly snow covered roads was hardly enough to confirm the accuracy of those numbers. 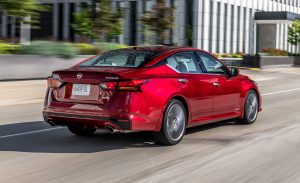 The Altima lineup starts with the $27,998 S trim which includes features such as automatic emergency braking with forward collision warning, the NissanConnect 8 inch touchscreen display, and Nissan’s ultra-comfortable Zero Gravity seats which are heated up front and power-adjustable on the driver’s side. The $31,498 SV model adds features such as 17 inch alloy wheels, blind-spot monitoring, ProPILOT assist, a sunroof, and a heated leather-wrapped steering wheel. The range tops out with the $34,998 SL model which includes leather seats, intelligent around-view monitor, and a Bose premium sound system.

Given the fitment of all-wheel drive, the Altima appears to be well positioned against its front-wheel drive rivals. The one exception to this is the Subaru Legacy, which, like the Altima, not only comes equipped with all-wheel drive, but also offers a more powerful engine option as well. Given Nissan’s frequent use of strong sales incentives, however, the Altima should still remain a strong value against competitors. It doesn’t exactly make a strong statement in terms of design or sportiness the way some of its competitors do, but it does make a convincing case as a crossover alternative. Given that’s where the major sales activity is, Nissan has given the Altima a solid shot at success.